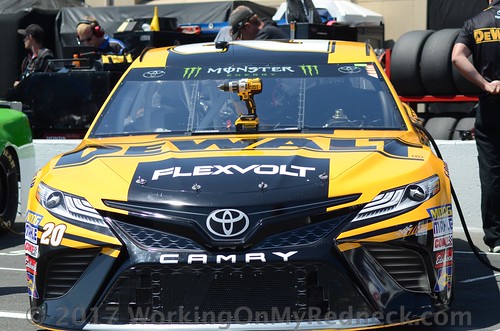 Matt Kenseth is a master of deflection—and he’s had plenty of practice heading into Sunday’s Alabama 500 at Talladega Superspeedway.

Ever since Kenseth announced at Kentucky Speedway in July that he wouldn’t be driving for Joe Gibbs Racing after the 2018 season, the 2003 Monster Energy NASCAR Cup Series champion has been the subject of rampant rumors and speculation.

For his part, Kenseth has parried questions about his 2018 status like a fencing champion. Asked whether he has had any recent substantive discussions about possible rides for next year, the droll Kenseth dead-panned an answer about a conversation with his wife.

“It probably weighs on me way less today than it did probably a few months ago,” Kenseth said of the uncertainty he’s facing. “Had some real productive talks with Katie. We’re going to run another day. Had a real, long productive talk together. That was enjoyable. It’s true, we did. Talked about it a lot.”

When talking about possible next steps in his driving career, Kenseth offered an unexpected option.

As facetious as Kenseth was during his question-and-answer session with reporters on Friday morning at Talladega Superspeedway, there remains the serious possibility that Kenseth could win a second championship without a deal lined up for 2018.

Entering the second race of the Monster Energy NASCAR Cup Series Playoff’s Round of 12, Kenseth is ninth in the series standings, one point behind Jamie McMurray in eighth and one point below the current cut line for the Round of 8. But Kenseth is a previous winner at Talladega, and he has two victories at Kansas Speedway, venue for the Oct. 22 Round of 12 elimination race.

In fact, in his last 14 starts at Kansas, Kenseth has two wins, 10 top 10s and no finish worse than 14th. So it’s a distinct possibility Kenseth will drive his No. 20 Joe Gibbs Racing Toyota into the Round of 8—before turning the car over to Erik Jones at the end of the year.

The question has still not been answered; “Will Matt Kenseth have a full time job in the Cup level in 2018”?