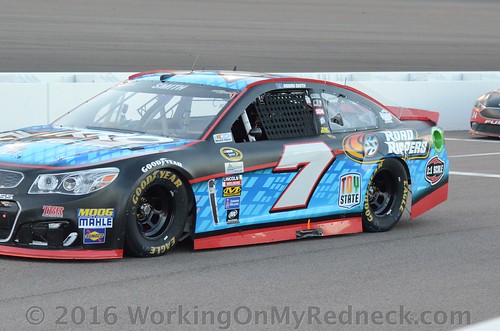 Justin Marks will pilot the No. 7 Tommy Baldwin Racing Chevrolet this weekend at Talladega Superspeedway. Golden Corral is the primary sponsor, along with Katerra, as an associate, for Sunday’s Alabama 500.

Golden Corral, the family-friendly buffet chain is known for their endless buffet with a variety of familiar favorites and new menu offerings. Golden Corral has been actively involved in the Monster Energy NASCAR Cup Series since 2011. As primary sponsor for the weekend, Golden Corral will again activate their Top 10 Kids Eat Free Promotion.  If Marks finishes in the Top 10, “Kids Eat Free” on Monday, October 16, with the purchase of an adult buffet at Golden Corral restaurants across the country.

“I’m thrilled to be a part of such an awesome race as the Alabama 500,” said Marks. “Monster Energy Cup Series racing is special and any opportunity to race is a big deal. Tommy and his team have a solid and proven track record this year on the superspeedways with the Golden Corral Chevy. I’m looking forward to working with this group and having a productive weekend and racing for a Top 10, so kids can eat free on Monday.”

“We’re excited to cheer on Justin on Sunday as he races for a Top 10 Kids Eat Free finish,” said Shelley Wolford, Vice President of National Marketing and Media at Golden Corral.