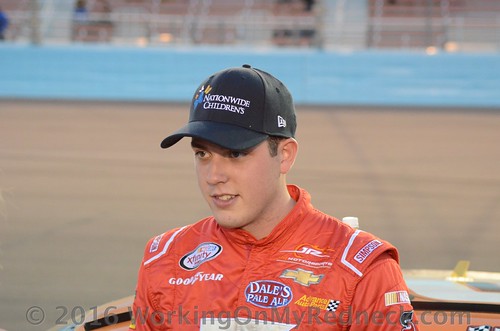 Chip Ganassi Racing (CGR) announced today that through their technical partnership with Hendrick Motorsports, Alex Bowman, 24, will pilot the No. 42 Chevrolet Camaro in the NASCAR XFINITY Series (NXS) races at Charlotte Motor Speedway (Oct. 7) and Phoenix International Raceway (Nov. 11). Hendrick Automotive Group’s HendrickCars.com, which features more than 43,000 new and pre-owned cars for sale, will serve as the primary sponsor in Charlotte with additional support from Vannoy Construction. A sponsor for Phoenix will be announced at a later date.

Earlier in the season (7/20/17), shortly after the HMS announcement of Bowman replacing Dale Jr., I asked the question about whether HMS would try to get Bowman a few races under his belt before the 2018 season?  At that time, I thought that it would be extremely foolish for Hendrick to throw Bowman to the wolves in 2018 without at least a couple of races in either the CWTS, NXS, or Cup series before the season begins in February.

Now we know the answer to that question!