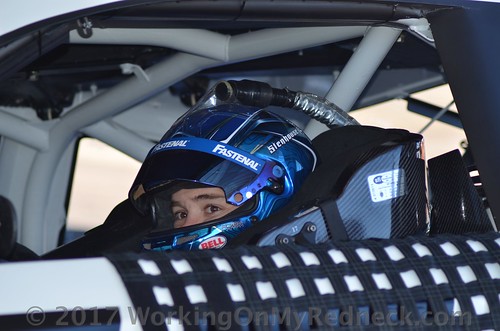 After a disaster at Chicagoland Speedway and a nondescript performance at New Hampshire, Ricky Stenhouse Jr. can take solace that he’s still in contention to advance beyond the Round of 16 in the Monster Energy NASCAR Cup Series Playoffs.

In fact, with the cutoff looming after Sunday’s Apache Warrior 400 at Dover International Speedway, Stenhouse is currently above the cut line, thanks to a tiebreaker he holds over Austin Dillon. Stenhouse has two victories in the series this season to one for the driver of the No. 3 Chevrolet.

Stenhouse and Dillon are tied for the 12th and final position in the second round, 105 points behind series leader Martin Truex Jr. Ryan Newman, Dillon’s teammate at Richard Childress Racing, is one point behind Dillon and Stenhouse.

After Chicagoland, where he scraped the wall, drew a penalty for a commitment line violation and finished 25th—last among the 16 Playoff drivers—Stenhouse thought his title campaign was over. But the misfortunes of others, in particular the catastrophic finishes of Kurt Busch and Kasey Kahne at New Hampshire, helped keep the race for the Round of 12 closer than expected.

“After our poor performance at Chicago I thought we were kind of out of it,” Stenhouse said. “Then when I got done, with the issues some of the other cars had, we were right there within striking distance.

“We didn’t have a great Loudon (15th), but we managed to gain some points there, and that’s what we have to keep doing. We have to keep our head down and fight to the end.”

TIL THE NEXT TIME, I AM STILL WORKING ON MY REDNECK!