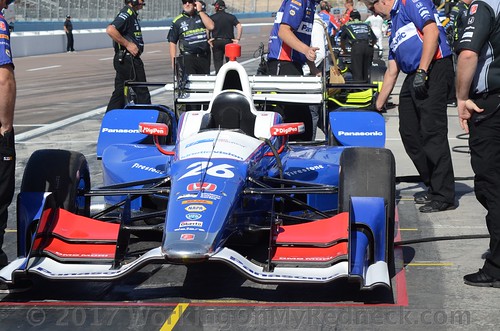 Starting in 2018, Zach Veach will take the wheel of the No. 26 Honda Indy car as the fourth entry in Andretti Autosport’s Verizon IndyCar Series effort. Veach has raced in every step of the Mazda Road to Indy ladder with Andretti Autosport, including a career-best Indy Lights championship finish of third in 2014.

“We are excited to give Zach the opportunity to show what he can do at the highest level, and I’m looking forward to welcoming him home, so to speak,” said Michael Andretti, CEO, Andretti Autosport. “Zach started his INDYCAR career with us in USF2000 and has driven in every step of the Mazda Road to Indy ladder with Andretti Autosport. He’s a driver that has always impressed me. Zach works hard, and he takes something away from every time he’s in the car – he’s constantly improving. He’s put the effort in, found success at every level and now his dream has come full circle.”

The 22-year-old American driver made his Verizon IndyCar Series debut April 23, 2017, at Barber Motorsport Park and his Indy 500 debut at this year’s 101st Running.

“I’ve been thinking about this day since St. Petersburg in 2010 when I sat beside Michael Andretti announcing that I’d be competing in USF2000 for his team,” said Veach. “To be driving in the Verizon IndyCar series with them is a dream come true and I can’t wait to get started.”

Veach is the fourth driver confirmed to an All-American Verizon IndyCar Series field for Andretti as he joins Ryan Hunter-Reay (No. 28 DHL Honda), Alexander Rossi (No. 98 NAPA AUTO PARTS Honda) and Marco Andretti (No. 27 Honda). The 2018 season goes green on the streets of St. Petersburg, Florida, March 11.