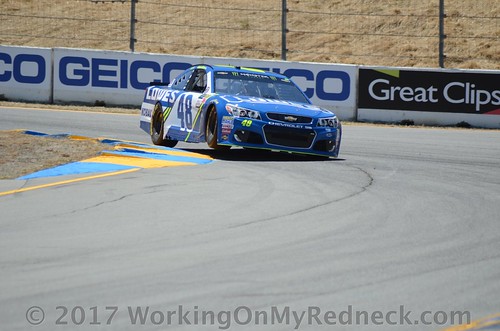 As the series enters the 10-race playoff, the first under the current stage-based format, Johnson is behind the likes of regular-season champion Martin Truex Jr., 2015 champion Kyle Busch and breakout star Kyle Larson as far as ‘favorites’ go.

Given Johnson’s statistical decline this season, even placing him among that list may be optimistic. Yes, Johnson has three victories, extending his streak of at least one win per year to 16 years, but all three triumphs came in the first 13 races.

What’s more, Johnson’s three wins are his only three top fives of the season so far. His previous career low for a full season in that statistical category was six, in his 2002 rookie year. In every other season, the driver of the No. 48 Hendrick Motorsports Chevrolet has authored at least 11 top fives, with a high-water mark of 20 in 2004 and 2007.

Johnson has led 188 laps this season, well below his previous career low of 547 in 2005. During a summer slump that has become all too typical for the No. 48 team, Johnson hasn’t led a single circuit since he was out front for four laps at Daytona in early July!

His eighth-place run last Saturday at Richmond Raceway was his best since a victory at Dover in the 13th race of the season.

So the question during playoff media day at the NASCAR Hall of Fame became not “Is Jimmie Johnson worth a bet?” but “Why is this man smiling?”

The simple answer lies in the recent history of the sport. As Johnson has proven over and over again, a slow summer can readily turn into a fast autumn. His record in the final 10 races of the season is unparalleled. Consider that, from 2004 to present, Johnson has accumulated 29 of his 83 career victories in playoff races.

There’s another straightforward explanation. The race tracks NASCAR visits during the summer months aren’t as conducive to Johnson’s driving style as are the playoff tracks. A whopping 48 of his wins have come at venues that appear in this year’s playoff.

“I feel that, once we get back to tracks that I know the sensation I’m looking for, and I know how to create speed at these tracks, I can help better steer our group and say, ‘OK, this is the area we need to work on.’

“Some of these tracks in the summer months, they aren’t my best tracks. It’s easy to get lost in the process and trying to understand where the speed is. A place like Dover (where Johnson has won 11 times) is going to be great medicine for us that I can get out there and say ‘OK, now it makes sense to me; we need to work in this area.”

Johnson allowed that he has seen signs of improvement lately, even though the statistics haven’t shown a dramatic shift.

“Last year, I’m vaguely remembering us stumbling on to some things, and I think that was pretty unusual to find a big chunk of speed that carried over to all the tracks,” Johnson said. “The rules are so tight, and they continue to get tighter and tighter every year, and you have less places to work.

“I have mentioned it a lot of times—you are stacking pennies to find one percent here, one percent there and after five, six, seven finds, you have something that will show up as a tenth of a second on the track. And that’s really what our sport has come to.”

Whether Johnson can find enough incremental speed to contend for a record eighth title remains to be seen. But does he consider himself a good bet at the current odds?

“It’s so unpredictable that there’s no telling,” Johnson said. “I think our chances are really good, and we should be in the conversation. I know we need to earn that right to go out and be a part of the conversation. So maybe there’s a good bet there to be had. …

“But I don’t want to take away from the frustration and effort that has gone into the summer. We didn’t enjoy last year, and we have had other summers that weren’t any fun.  We’ve worked really hard to not let it happen in 2017, but—damn it—it did again. (But) after the summer is the fall, and we always get hot in the fall. We’re certainly hoping for more of the same.”