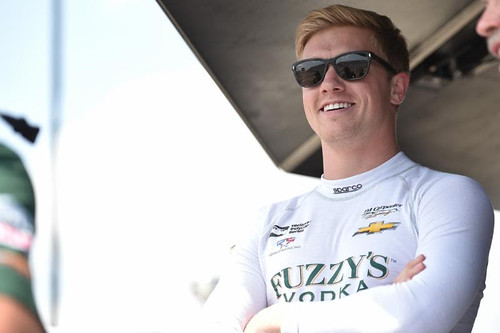 After two seasons as the road and street course driver of Ed Carpenter Racing’s No. 20, Spencer Pigot will move to the No. 21 in 2018 and race full-time in the Verizon IndyCar Series. The 23-year-old’s first full season of Indy car competition is the next step in a career which has seen him collect multiple championships along the Mazda Road to Indy prior to joinin­­­g ECR during the 2016 season. In 2017, Pigot became the first driver to retain the road and street course seat of the No. 20 for a second year and will continue with ECR as the driver of the No. 21 for the entirety of the 2018 season.

“To say I am excited about 2018 would be an understatement. I have really enjoyed my time so far with Ed Carpenter Racing and this is the next step in what I hope is a long, successful partnership with the team in the Verizon IndyCar Series,” said Pigot. “I am very thankful to Ed Carpenter, Tony George, Stuart Reed and everyone at ECR for their confidence in me to deliver the results the team deserves. It is a privilege to represent Fuzzy’s Vodka, Preferred Freezer Services, Direct Supply and all of the other partners of ECR in 2018.”

In his sophomore season, Pigot’s name has become synonymous with the ability to race his way through the field. He is credited with over 50 on-track passes for position this year, but unfortunate circumstances have limited him to three Top 10 finishes. He was running 5th in St. Petersburg when a brake rotor ignited; a misfire of the engine at the Indianapolis Motor Speedway dropped him from 6th; and he had climbed to 8th at Road America when he had to make two lengthy pit stops for repairs to the suspension. In Toronto, Pigot gained seven positions in the first 15 green flag laps but was relegated to the rear of the field after one of his tires was cut by another competitor. He has continually improved throughout the season, matching his best qualifying position to date just two weeks ago at Watkins Glen International and leading the first laps of his Indy car career.

“It is very exciting to be announcing that Spencer will be competing in a full-time role for ECR in 2018. Spencer made significant strides from his rookie season into his sophomore year and we see much more potential in his ability,” stated Ed Carpenter, the only owner/driver in the Verizon IndyCar Series. Carpenter continued, “Spencer has worked very hard to improve in all areas of his driving and we feel the time has come to give him a chance to compete for the championship. I look forward to his continued development and reaching the top step of the podium in 2018.”

All but four of Pigot’s 21 Indy car starts have been with Ed Carpenter Racing. The Orlando, Fla. native was awarded a three-race scholarship after winning the 2015 Indy Lights championship, which was carried out with Rahal Letterman Lanigan Racing. After competing in the 100th Running of the Indianapolis 500 with RLLR, Pigot joined ECR as road and street course driver of the No. 20 for the remainder of the 2016 season. He retained that role for 2017, the first driver to do so since the ride became a shared seat with Carpenter in 2014. Since the No. 20 is piloted by Carpenter in the Indianapolis 500, Pigot reunited with Juncos Racing in May of 2017 for the opportunity to race in the legendary event for the second time. Pigot’s 2015 Indy Lights title and 2014 Pro Mazda championship came while competing for Juncos.

Though he has not been behind the wheel, Pigot has attended every oval event with ECR since joining the team in 2016. In an effort to learn as much as possible, Pigot has been on Carpenter’s timing stand during each practice and qualifying session and has observed the races from the spotter’s stand. Outside of Indy car, Pigot has continued to hone his skills by competing for Mazda Racing in the endurance races of the IMSA Weather Tech Sports Car Championship.

Pigot is looking forward to racing alongside Carpenter for the first time as both his team owner and teammate. “I will still have a lot to learn as 2018 will be my first full season in Indy car, but I know I have the team and teammate with Ed to help me as I get used to regularly racing on ovals again.” Carpenter will continue to drive the No. 20 Fuzzy’s Ultra Premium Vodka Chevrolet on ovals in 2018 for what will be his 16th year of Indy car competition. The road and street course program for the No. 20 is still under consideration.

At the most recent event at Watkins Glen International, Ed Carpenter Racing celebrated its 100th race. Formed in late 2011, ECR entered the Verizon IndyCar Series full-time in 2012. The team has proven its versatility by collecting seven wins on each type of track the series competes on – street and road courses, short ovals and speedways. ECR Chevrolets have started on the front row of the Indianapolis 500 four of the past five years, including Carpenter’s two pole positions in 2013 and 2014 and this year’s qualifying effort that landed him in the middle of the front row. The Speedway, Ind.-based team has 22 Top 5 finishes to date, 17 of which have been podiums.

The 2017 Verizon IndyCar Series season will conclude this weekend with 85 laps around the natural terrain road course of Sonoma Raceway. The GoPro Grand Prix will take place on Sunday, September 17, then Carpenter and Pigot will begin an extensive off-season testing program to prepare for 2018’s universal aero kit.