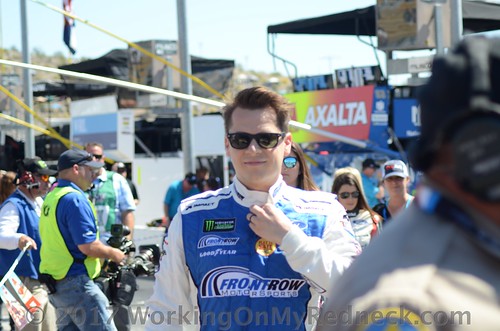 “We definitely want to redeem ourselves at Chicago this weekend after the rough night we had in Richmond. We were out of the race early after cutting a tire and hitting the wall, which was really disappointing after we had a pretty fast car in practice. We’ve got CSX back on the car again this weekend promoting the ‘Play It Safe’ campaign, so we’re definitely looking forward to having a better weekend.

“I’ll be greeting fans on Sunday morning at the main gate. A few months ago, when I was making all kinds of promises to people on Twitter based on how many retweets they could get, I promised Chicagoland Speedway to be their gate greeter on race day. I’ve done a bunch of fun things with these retweet deals, and I think this is one of the last ones to fulfill. It should be pretty cool saying hey to everybody as they come through the gates.

“Chicago is an interesting and challenging race track. It’s got some age to the pavement, so it definitely feels like it produces some tire fall-off. The bumps in Turns 3 and 4 have gotten kind of violent, too, so the cars are definitely a challenge to set up for that place. But I think it’s a good mile-and-a-half race track. I don’t think these tracks are as ‘cookie cutter’ as people think they are.”

Meet Landon
Sunday, Sept. 17, 9:30am – Cassill will greet fans at the Chicagoland Speedway main entrance, fulfilling a “How Many Retweets” promise made in April.