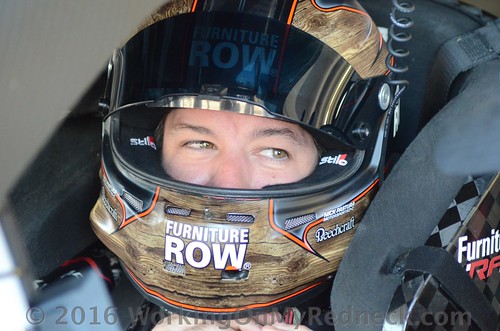 Martin Truex Jr. knows all about winning and losing in the closing laps of a race. He’s been on both sides, including on the winning side in last year’s NASCAR Cup Series race at Chicagoland Speedway.

With five laps remaining in the playoff opener and running second to Chase Elliott a caution came out. Truex’s over-the-wall crew got him off pit road first, and when the race went green with two laps to go he hung on to score the victory.

“I wasn’t going to catch Chase,” recalled Truex. “But the caution came out and our pit crew was spot on during the money stop.”

But the past two weekends have been a different story for Truex, who saw back-to-back wins slip away in the closing laps. A flat tire in Darlington and a late-race caution in Richmond snatched away victories from Truex and the Denver-based Furniture Row Racing team.

“If anything the past two weekends will only motivate us more,” said Truex, who was three laps shy of winning in both Darlington and Richmond.

Truex captured the 26-race regular season championship and enters the playoffs as the No. 1 seed in the 16 driver field, thanks to the 53 bonus points he earned during the regular season for claiming four race wins and 18 stage wins. (see below for how the NASCAR playoff system works)

There are a number of reasons why Truex feels optimistic heading into the playoffs. First and foremost, he is the defending champion of the Tales of the Turtles 400 at Chicagoland.

Second on the list would be that Chicagoland is a 1.5-mile track, a configuration that Truex’s No. 78 Toyota has been strong at this season. Three of his four season victories were at 1.5-mile tracks – Las Vegas Motor Speedway, Kansas Speedway and Kentucky Speedway.

“No question, we like the 1.5-mile tracks, but we have also been strong at other types of tracks too, including a road race win at Watkins Glen,” stated Truex. “You can’t look ahead or wallow in the past, you have to have 100 percent focus on what’s in front of you, and that would be Chicagoland Speedway.

Truex, who will drive the No. 78 Furniture Row/Denver Mattress Toyota in Sunday’s playoff opener at Chicagoland Speedway, said aside from a few tweaks the team is ready to pursue the ultimate dream in stock car racing.”

“Obviously I think it’s a good thing that we have them (playoff points), and I think we could have used them last year with the way the playoffs worked out for us,” recalled Truex. “We need to focus on running as strong as we possibly can and keep the momentum going that we’ve had lately.

“Cars have been just lightning fast and teams have been doing a great job. We’ve got a few little things to work on, but all in all, I feel like we’re definitely one of the strongest teams. Hopefully we can just continue to perform at the level we’re capable of, and we don’t need those bonus points, but it’s going to be nice to have them, that’s for sure.”

How the NASCAR Playoff Format Works
Sixteen drivers earn a berth in the first round of the playoffs. All point totals are reset to 2,000 plus earned playoff bonus points accumulated to date. After three playoff races in Round 1, four drivers will be eliminated, reducing the field to 12.  After three playoff races in Round 2 another four drivers will be eliminated and same for Round 3. The final four drivers will enter the season finale at Homestead-Miami Speedway. The Championship 4 driver, who finishes best among the four finalists in the Homestead race, will be crowned the 2017 NASCAR champion.