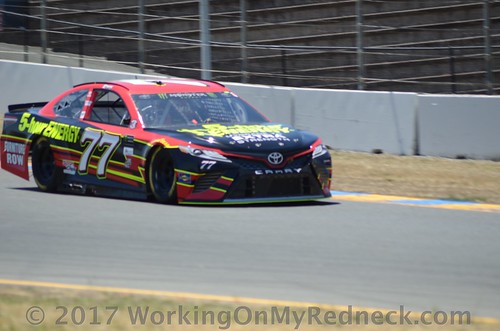 Erik Jones and the No. 77 SiriusXM Toyota were in position to score their fourth consecutive top-five finish until a late-race caution and missed shift on the ensuing overtime restart forced them to settle for sixth in Saturday night’s Federated Auto Parts 400 at Richmond Raceway.

Jones hit pit road running fourth and lined up fifth, on the inside of Row 3, for the two-lap dash to the checkered flag. Unfortunately, a missed shift between second and third gears on the restart dropped Jones two spots as he crossed the finish line in sixth place.

“I was hoping we’d try to make it three wide and make something happen, you know,” said Jones. “We were just going to have to bully our way to the front and unfortunately we just didn’t get the chance. I just missed third gear and messed up. I mean, I don’t know if I’ve ever missed a shift before. It’s just really disappointing. I really hate it for my guys and hate that we didn’t at least get a shot at it.

Jones qualified 10th and started from the outside of Row 5 for the 400-lap regular season-finale on the 0.75-mile oval. The handling of the No. 77 SiriusXM Toyota was loose early but adjustments throughout the first 100-lap segment alleviated the issue and Jones ended Stage 1 in the seventh position.

The final 200-lap stage slowed for a caution on Lap 257, with Jones maintaining the fifth position. A green-flag stop shuffled the deck a bit but Jones was soon back in fifth after the field had cycled through the stops. The No. 77 Toyota moved into fourth place on Lap 395 before the caution final caution three laps later forced the overtime finish.