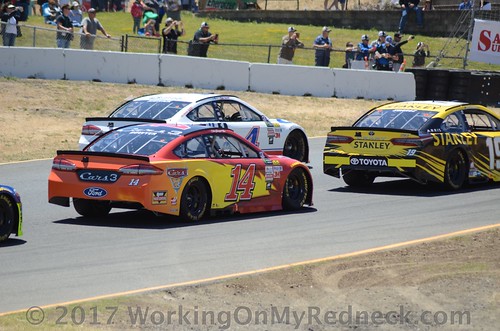 ● Told crew in opening laps the car would not turn as well as he preferred.

● After a pit stop Bowyer began a charge to the front, gaining several spots on two restarts.

● Crew told Bowyer his was the fastest car on the track by lap 75.

● Bowyer lined up fifth to start Stage 2, but he was sent to the rear of the 39-car field to serve a penalty for a crew member over the wall too early during the pit stop between stages.

● Without the aid of a caution during the stage, Bowyer drove from the back of the field to 15th.

● Pit crew gained Bowyer five spots during a pit stop before the green flag, moving him from 15th to 10th.

● Bowyer made his third good restart of the race and jumped to eighth at the start of the stage.

● Reported his car was “too tight” in the stage’s opening laps but raced in seventh.

● Danica Patrick was spun by Austin Dillon on lap 255, and pit road was opened two laps later. Somehow, an ambulance appeared at the entrance to pit road and stopped there, forcing cars to dodge it and hit the brakes and causing an accordion-like wreck that involved Matt Kenseth and Bowyer along with several other cars.

● Bowyer dropped to 22nd and could never contend for victory in the final laps.

●  Bowyer scored the most points of the drivers who did not make the Cup playoffs that begin next weekend. He needed to win Saturday’s race to earn a spot in the playoffs.

●  There were seven caution periods for a total of 38 laps. Nineteen of the 39 drivers in the Federated Auto Parts 400 finished on the lead lap.

●  Kyle Larson won the Federated Auto Parts 400 to score his fifth career Monster Energy NASCAR Cup Series victory, his fourth of the season and his first at Richmond. He led runner-up Joey Logano across the finish line as the race ended under caution.

●  Martin Truex Jr. leads the championship standings with 2,053 points and holds a 20-point advantage over his nearest pursuer, Larson.

“What a tough way to end the regular season. We had a great car tonight, and I’m proud of my guys on the No. 14 and everyone at SHR. We have a lot of racing left in this season.”