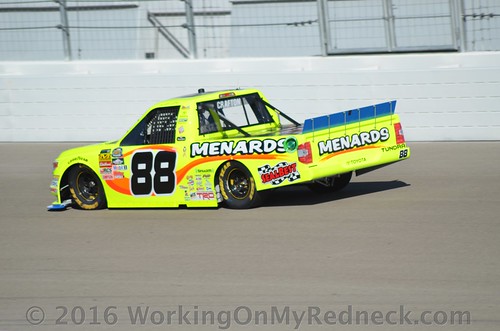 “Bristol is a unique, half-mile, high -banked, bullring-type race track. You are flying around the place, and it gets crowded with 32 other trucks vying for position. It’s a fun race to drive, but an even better track for the fans. We have been close there. 2015 was a heartbreak, for sure. We were leading it, and I felt like I had a pretty comfortable lead, and then we had a yellow for whatever reason. We thought we were gonna win it. Then when it started raining, I was leading the race, and then when we went back green after the rain, I think it was like 7 to go, 10 to go, something right in there, if that. On that restart, the fuel just didn’t pick-up in the fuel cell. I went thru the gears and I took-off okay, and then just before the start/finish line it laid over on its nose, and we ended up finishing seventh. We were running inside the top-five there last year, until we had engine problems. It’s on the bucket list to win, that’s for sure.”