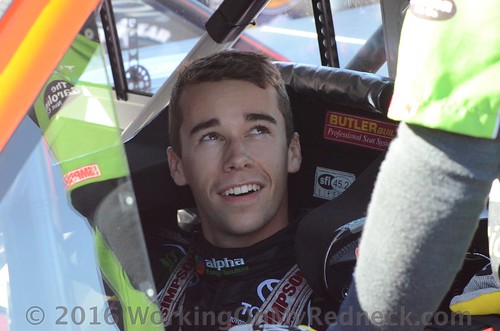 You’ve got quite a few laps around “Thunder Valley.” Are you looking forward to getting back there this week?

“Yeah, I’m really excited to get back to Bristol. We ran really well there last year, up to the point where we had a motor problem, which ended our race prematurely. Up until then though, we were running second, and I felt like we had the opportunity to compete for a win. We’re taking a different truck to Bristol this year, and a new setup that we have been working hard on. I feel like if you’re not trying to innovate with setup this year, you’re going backwards. Everything we’ve done this year, has been new – never done at ThorSport (Racing) – I think that’s shown. We’ve had a lot more speed this year.”

“I would say its probably the most active track that we have on the schedule. Everything happens so quickly. You don’t get a break on the straightaways, you don’t get those extra few seconds to slow down, take a breath, look in your mirror – do the things you would like to do. Your driving by the seat of your pants there. Lap times are so fast at a place like Bristol, that I find myself holding my breath, reminding myself that I need to breathe. It’s such a tough track. I do enjoy it, but you really do have to be on your game the whole time – no mistakes – the stress level is definitely high.”