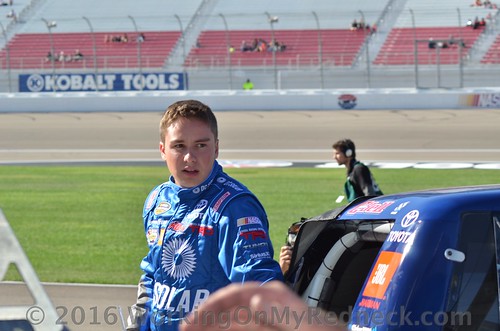 Does Kyle Larson have inside information on future plans for the No. 77 Furniture Row Racing Toyota?

With Erik Jones moving from Furniture Row Racing to Joe Gibbs Racing next season, the No. 77 is currently without a driver. And team owner Barney Visser has said the fate of the No. 77 is still to be determined, pending funding.

When discussing up-and-coming drivers on Saturday, Larson had a strong recommendation for that empty ride.

“I definitely think you have to have Christopher Bell at the top of that list (of young, talented drivers),” Larson said. “I got to see his potential a couple years before he ever made it to truck (NASCAR Camping World Truck Series).

“Seeing how good he is, I don’t know what the Furniture Row situation is, but I hope Bell gets to go in the No. 77. There are so many kids in dirt racing that deserve an opportunity to make it…at least get a shot at a solid K&N Series ride and then see how they can progress from there. It just comes down to funding these days.”

Bell currently is in his second full season with Kyle Busch Motorsports in the NASCAR Camping World Truck Series, after advancing to the championship race in 2016. He is also scheduled to run eight NASCAR XFINITY Series events this season for Joe Gibbs Racing.

“Young Money’s” recommendation to Barney Visser may be a little premature, but sometimes you have to go out on a limb and take a chance!