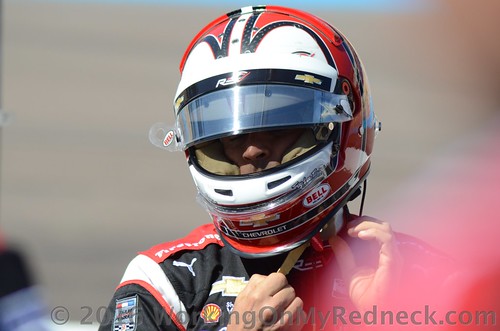 Recap: Simon Pagenaud and the No. 1 Menards Team Penske Chevrolet team probably deserved a better fate than a seventh-place finish in the Iowa Corn 300 on Sunday at Iowa Speedway, but they were unlucky in Saturday’s qualifying draw. Pagenaud drew the short straw and had to hit the track first in qualifying for the Iowa Corn 300. The 7/8-mile oval was a little slick, which hampered the teams that went out early. As a result, the reigning Verizon IndyCar Series champion started the race from the 11th position and battled a loose car in traffic throughout much of Sunday’s 300-lap race. The Menards pit crew continually worked to make the car better with subtle air pressure and front wing adjustments. They tried a different strategy when the caution flag waved on Lap 197 for light rain when Pagenaud came to pit lane for fresh tires while most of the leaders stayed out on track. Over the final two stints, the No. 1 machine showed its speed, but the turbulence in traffic continued to be a hurdle. When the race restarted on Lap 210 after a red flag to dry the track, Pagenaud was 14th and he improved to the seventh spot in less than 20 laps. Unfortunately, that was as far as the French-born driver could advance. Despite dropping a rung in the point standings due to teammate Helio Castroneves’ victory, Pagenaud did creep a little closer to the leader and is now 31 markers off the pace heading into next weekend’s race on the streets of Toronto.

Quote: “It took a little while to get the Menards Chevy running fast, but it definitely was at the end. There was so much tire degradation that it was difficult to get a great feel for balance. Essentially, seventh is not bad. It’s not what we want to do, but starting 11th and being unlucky with the draw in qualifying are factors. I can’t complain about it. That’s the sport. We just need to be patient and keep doing what we’re doing. At some point we’ll get another win. I feel awesome for Helio (Castroneves) – just super happy. Instead of concentrating on me today, I think we all should congratulate Helio. He’s been waiting for this win since 2014 and it’s kind of unfair considering how competitive he has been.”

Recap: After dominating the Iowa race a season ago while with Ed Carpenter Racing, Josef Newgarden was a victim of circumstance in Sunday’s Iowa Corn 300 at Iowa Speedway but still produced a top-six finish. As the third driver to qualify Saturday on a slick track after a tough draw, the first-year Team Penske driver started Sunday’s race from the 16th position. From the wave of the green flag, Newgarden began his march to the front and he moved inside the top 10 following the first of four caution flags on the day. He moved up to sixth just prior to the second caution on Lap 132, but the advance stalled for several circuits around the 7/8-mile oval. When the final yellow flag of the race waved due to light rain on Lap 197, the Fitzgerald Glider Kits Chevy headed down pit road for fresh tires in hopes of making up ground on the leaders as allof the top five cars remained on the track. On the subsequent restart, Newgarden was 14th in the running order and he used the fresh rubber to his advantage by moving up to seventh place in under 20 laps. However, once Newgarden made his final stop and was on the same strategy as the rest of the leaders, the young American was not able to crack the top five and he brought home a solid sixth-place finish. In the championship standings, Newgarden holds down the fifth spot and is now 56 points behind series leader Scott Dixon.

Quote: “It was one of those not bad, but not great days. The Fitzgerald Glider Kits Chevrolet was really good, but we just couldn’t get over the hump. Everyone is so equal now that it really is challenging to make up large amounts of ground. We were a little behind the eight ball after qualifying 16th, but that’s the draw sometimes. I really couldn’t be happier for Helio (Castroneves). He’s been so close so many times. It was a great day for Team Penske.”

Recap: Helio Castroneves ended Sunday’s race the way he hoped – climbing the fence at Iowa Speedway to celebrate his first Verizon IndyCar Series win in over three years. The three-time Indianapolis 500 winner turned in a dominant performance in the No. 3 Hitachi Chevrolet to produce his 30thcareer series victory and Team Penske’s first win at the Iowa Speedway short oval. The Brazilian-born driver began the race from the second row in the third position. As a sign of things to come, he moved into the second spot by the second lap of the race. From, there he maintained a view from the front half of the field. On Lap 26, Castroneves took over the race lead for the first time during the event. He continued to lead until the caution flag waved when Mikhail Aleshin made contact with the wall on Lap 57. Castroneves brought the Hitachi Dallara/Chevrolet to the pits for fuel and tires. The quick stop allowed him to maintain his lead when the green flag waved to restart the race. He led until Lap 97 when JR Hildebrand took over the top spot as Castroneves ran in the second position for several laps. On Lap 132, the caution flag waved again which led to another pit stop for the Hitachi team. Castroneves received four fresh tires, fuel and one turn on the front wing. He quickly returned to the lead on Lap 136 and remained there until the caution flag flew again on Lap 171. After a stop for tires, fuel and another wing adjustment, Castroneves restarted second on Lap 182 but he recaptured the lead two laps later from Charlie Kimball, who stayed out on track during the caution. After the race was red flagged for moisture on the track surface, Castroneves continued his pursuit when the green flag waved again on Lap 210. He made his final pit top on Lap 254 and he battled with Hildebrand shortly after the stop for the lead that would ultimately determine the result of the race. Castroneves seized control of the lead for the final time on Lap 268 and he never looked back. He won by 3.96 seconds as he pulled away over the closing laps. With a fast car, solid strategy and great work in the pits from the No. 3 Hitachi crew, Castroneves returned to Victory Lane for the first time in 53 races. He led an incredible 217 laps out of 300 – demonstrating that he continues to be one of the fastest and most consistent drivers in the series after 20 years of racing at the highest level in INDYCAR.

Quote: “That was great. I can’t thank Team Penske, Hitachi and Chevy enough and all our partners and especially the people back in the shop. They don’t get much credit, but without their work and effort, we wouldn’t be able to do what we did. It’s a great team effort because we came here, we tried a lot of different setups between all four cars, and I picked the winning one, so it was really good. The car felt really good, and it was just great. It was a little bit off in the beginning. We missed a little bit on the setup, then we made some adjustments after the first stop or second stop, and the car was fantastic. It was really good. Yes, this win was a long time coming, but you can never stop believing, and my team never stopped supporting me on that. We didn’t have a yellow at the wrong time; we didn’t have issues with the tires or anything else that has gotten us so many times. And when everything comes together like this, you have to execute and we did just that.”

Recap: Will Power had a strong performance all weekend at Iowa Speedway – starting with his series-leading fourth pole position won this season – which helped him earn a top-five result in the No. 12 Verizon Chevrolet Sunday in the Iowa Corn 300 at Iowa Speedway. Power enjoyed a strong start to the Sunday evening event, leading the first 19 laps but by Lap 20, he was dealing with some understeer on the Verizon Chevy. On the same lap, teammate Helio Castroneves took over the lead. On Lap 57, the caution flag waved as Mikhail Aleshin made contact with the wall. This allowed the No. 12 Verizon crew to assess the car and provide fresh tires and fuel on Power’s first stop. Racing went back to green on Lap 68, when Power restarted second. By Lap 101, Power reported a vibration and he hoped for another opportunity to visit the pits. On Lap 132 he got his wish as the caution flag waved. On Lap 135, the Verizon team serviced the car with a front wing adjustment, fuel and tires. One the Lap 142 race restart, Power ran third and he maintained his position among the race leaders. After a brief red flag for rain with under 100 laps left in the Iowa Corn 300, racing resumed on Lap 210 with Power running second. He made his final stop on Lap 257 for tires and fuel. He battled hard over the final 50 laps with JR Hildebrand, Ryan Hunter-Reay and Graham Rahal as Power took the checkered flag in the fourth position. It wasn’t the win he hoped for but Power posted his sixth top-five result of 2017 and his fourth straight as he continues in championship contention, now 53 points behind leader Scott Dixon heading into Toronto.

Quote: “I wish we could have gotten the Verizon Chevrolet to Victory Lane, but I don’t feel bad at all with where we ended up. It was a good day. Not unhappy at all. The car was pretty loose on that second to last stint, but very good on that final stint. We got another solid finish and scored some important points. But the story of today is Helio (Castroneves). I’m mega happy for him. It’s really kind of ridiculous that it has taken this long with how good they’ve been. Something always seemed to bite them, but not today. I couldn’t be happier.”