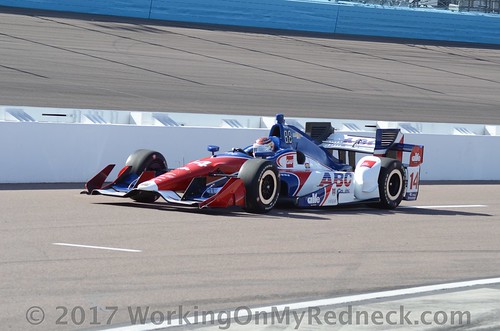 The end of the Iowa Corn 300 came early for both Carlos Munoz and Conor Daly as both drivers brushed the Turn 4 wall after fairly decent runs in the 300 lap race at Iowa Speedway Sunday afternoon.

Munoz, who started last after spinning before completing his qualifying run yesterday, was moving up through the field in the No. 14 ABC Supply Chevrolet. He held off leader Helio Castroneves for over 30 laps in the first stint of the race. On a short 7/8-mile oval like Iowa Speedway, the leaders start lapping cars within 15 laps but Munoz had passed a couple cars initially and then fended off Castroneves’ repeated attempts to pass.

The yellow came out on lap 57 for Mikhail Aleshin’s contact with the Turn 2 wall and the field bunched up under the yellow, giving Munoz some breathing room. The No. 14 ABC Supply crew had a good stop allowing Munoz to gain a spot in the pits and he restarted 15th. He lost a spot when the green flew on lap 67 but was keeping pace as his car seemed to get better further into the stint. Then around lap 120, he radioed in that he felt a vibration and the team thought he had a problem with a tire so they told him to pit since it was within the fuel window. He pitted for fresh rubber and after two laps, he brushed the wall.

Munoz said, “I feel really sorry for the team. The car was pretty decent in the race, maybe not the fastest but really consistent through the run. I went out on new tires and the car didn’t turn. In Turn 4, the car went straight, got in the marbles and there was no way back from that.”

The brush with the wall damaged the right side suspension. There was not enough time in the race to fix it and improve their position so the team took it behind the wall. He placed 20th.

Conor Daly, who started 19th in the No. 4 ABC Supply Chevrolet, was also making some nice moves in the first stint and had gained a couple positions but he could not fend off Castroneves and went down a lap. He regained the lap when he got the wave around but when he pitted they didn’t get all the fuel in and he had to pit again for the fill up. So he lost the lap as they restarted the race. He pitted again under green on lap 109 for fuel and tires and despite losing the normal two laps when pitting under green, he started passing cars high and low since he was on fresh rubber.

Then came the yellow for Munoz’s accident and Daly was able to regain a lap with the wave around. However, it was 26 laps later when he too brushed the wall in Turn 4.

“Tough day,” said Daly, who placed 19th. “I was happy with the first stint. The car felt good, got a nice start, gained a couple of positions, it was nice. But really it was like driving on a knife edge. We improved the car from the last session but we’re still not where we need to be. Working hard out there and the car just snapped loose and I tried to save it but I couldn’t keep it out of the wall. Hopefully we can develop it more and come back stronger.”

Tonight both teams head to the Indianapolis race shop where they will convert the cars to a street circuit configuration for the Honda Indy Toronto next weekend.