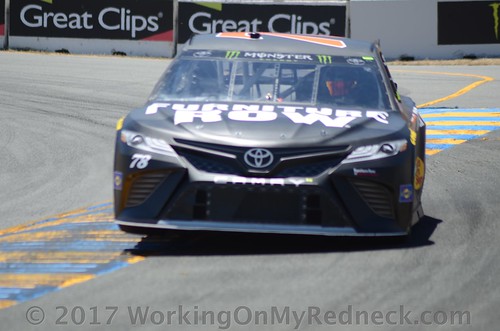 Once again Martin Truex Jr. was in contention to post his third victory of the season, but a late-race engine failure ended his day at the Sonoma road course with a 37th-place finish

Since winning in Kansas in mid-May, Truex’s Toyota has been one of the dominating cars in the NASCAR Cup Series.

Sunday was no different for the Furniture Row Racing driver who led a race high of 25 laps in the Toyota/Save Mart 350 road race. But the power failure eventually caught up to Truex who had no option but to retire from the race on Lap 86 of 110.

Truex won the first stage, lifting his stage-leading wins to 11, seven more than the nearest competitor.  He also picked up one playoff bonus point for winning the stage. He leads the field with 21 playoff bonus points after 16 races.

Before Truex started to experience the power issue with his No. 78 Furniture Row/Denver Mattress Toyota, he was leading Sunday’s NASCAR Cup Series race when he came in for his final pit stop on Lap 70. However, he lost his lead over Kevin Harvick due to a pit road issue. Harvick went on to win the race by more than eight seconds.

According to Truex, the power issue was building even though he was still running close to the leader.

“For about 20 laps I was on seven cylinders,” said Truex. “After we made that last pit stop when we lost the lead to Harvick, I lost a cylinder as soon as I left pit road. I was surprised we were able to keep up with him as well as we could on seven, but just shows how strong our car was. Just wasn’t meant to be today.”

Truex started the race from the third position and was strong immediately on the 11-turn, 1.99-mile road course, taking the lead for the first time on Lap 10.

“It’s very disappointing, I mean, sitting there running second on seven cylinders and staying right with the leader,” noted Truex, who led three different times before retiring from the race. “I mean this Toyota was so good today. Everyone at Furniture Row Racing did an awesome job with it. Everybody back in Denver, thank you for just crazy fast cars. TRD (Toyota Racing Development) stuff has been really good for the past year and a half. You know sometimes these things happen, so appreciate all their effort out there at TRD. Makes good power. It’s just this one wasn’t ready to go the whole distance today.”