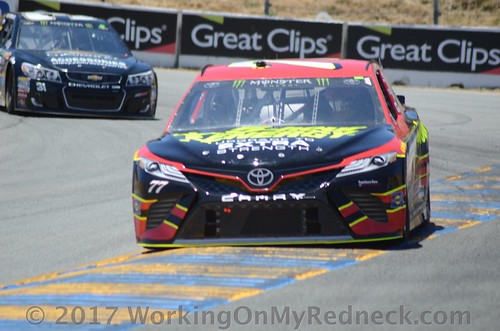 The overall goal for Erik Jones’ road racing debut in the NASCAR Cup Series was to earn a top 25 finish and that’s exactly what he and the No. 77 5-hour ENERGY Extra Strength Toyota team accomplished in Sunday’s Toyota/Save Mart 350 at Sonoma Raceway.

With just five road course starts in his NASCAR national series career, three in the NASCAR XFINITY Series and two in the NASCAR Camping World Truck Series, the Byron, Mich., native aimed to be as competitive as possible, log as many laps as possible, and bring home a clean race car. He accomplished all of the above, finishing in 25th place, one lap down to the leaders due to a late pit stop.

Jones maintained his 16th-place position in the 2017 NASCAR Cup Series point standings after 16 races. He is nine points behind Ryan Newman for 15thplace and 65 behind Matt Kenseth for 12th.

“It was a long day,” said Jones. “You know, learning all day and coming home with a top 25 finish is all we really wanted to do. I’m not really sure how to get around [the track], so I’ve got to go back and look at the video to see how to be faster, be better for next time and, hopefully, come back with a little more speed in the 5-hour ENERGY Toyota.”

The No. 77 5-hour ENERGY Toyota took the green flag from the 30th starting spot and Jones picked up four positions by the time the first caution slowed the field on Lap 14. Crew chief Chris Gayle called Jones to pit road one lap later and Jones restarted 33rd on Lap 17.

Jones was 28th in the running order when Gayle again called him to pit road on Lap 22 for a green-flag stop in keeping with the race strategy developed and agreed to over the weekend. The Furniture Row Racing entry finished the 25-lap first stage in 34th place.

The No. 77 was scored in the 30th position at the end of the second 25-lap stage but, again, stayed out during the break and restarted on Lap 54 in 15thplace. Jones ran 23rd on Lap 60 and 10 laps later made a green-flag stop that cycled him out in the 29th position.

On Lap 92 he called over the radio that he’d flat-spotted the tires braking hard into Turn 11. He came down pit road to the attention of the 5-hour ENERGY crew a lap later for fresh tires and returned to action in the 31st position, one lap down with 15 laps remaining.

Jones ran 30th with 10 laps remaining and 29th by Lap 105 before picking up an additional four positions in the final five laps.

The race had 13 lead changes among 10 drivers and there were six cautions for 34 laps.

The next race is Saturday July 1 at Daytona International Speedway.

TIUL NEXT TIME, I AM STILL WORKING ON MY REDNECK!