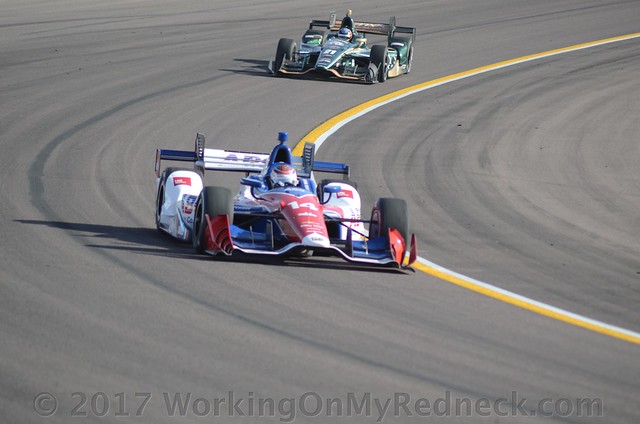 The final round of qualifying for the 101st Running of the Indianapolis 500 took place Sunday at the 2.5-mile Indianapolis Motor Speedway after a 35-minute practice session which allowed teams to put finishing touches on their cars before embarking on their 10-mile qualifying run.

Drivers were allowed one qualifying run to determine their position on the 33-car starting grid, and rookie Zach Veach was the first out to qualify at 2:45 p.m. Driving the No. 40 IWiT Championship Chevrolet, he posted a four-lap average speed of 221.081mph. He will start 32nd in the race.

“Extremely happy to say that we will be competing in our first Indianapolis 500,” the 22-year-old rookie said. “It’s official now after successfully qualifying. Still fighting little gremlins from our incident on Friday, the car balance doesn’t seem right for how the car was. My crew is working really hard to see what issues still lie there. But they’ve been doing a great job all week working really hard. I have full confidence in them that they will get the Indy Women in Tech Championship car out there good as new on Monday for race practice. I know our race car is a lot more competitive than our qualifying car. I’m really excited to see what we can do and I’ll be charging to the front come race day.”

Conor Daly qualified his No. 4 ABC Supply Chevrolet with a four-lap average speed of 226.439mph which places him 26th on the starting grid, in the middle of the ninth row.

“I think the positive side of today is the fact that we did our best laps by ourselves,” Daly said. “It was definitely a challenging run for me. We had a couple moments out there and it’s a shame that we fell off so much, but in the end, I’m happy to have a better run and just picking up speed in general.”

Carlos Munoz was the last of the Foyt team to qualify. His average speed of 227.921mph in the No. 14 ABC Supply Chevrolet landed him in the eighth row outside of Team Penske teammates Josef Newgarden (22nd) and current IndyCar Series champion Simon Pagenaud (23rd).

“It was a little bit tough qualifying,” Munoz said. “The balance wasn’t 100 percent. We’ll have to see what we’ve got. We’re going to start at the back of the field, but hopefully we’ll have a good car for the race and we’ll concentrate tomorrow on that.”

Scott Dixon thrilled the crowd with his qualifying run in the Chip Ganassi Racing Honda; he posted an average speed of 232.164mph, the fastest qualifying run since the 1996 second-day run by Arie Luyendyk, whose 236.986mph four-lap average speed is still the track record. It is Dixon’s third Indy 500 pole.

“It feels fast,” Dixon said. “Any speed 215 or 220 around this place feels really fast, but I think you just block it all out. You’re constantly just trying to feel how the car is, see where you can place it, see if you can improve the next lap. It’s been so intense this weekend just trying to hold onto the car for the four laps. I think that’s where all the focus has been.”

Two-time 500 pole winner Ed Carpenter will start second in his Fuzzy’s Vodka Chevrolet while defending 500 champion Alexander Rossi in the NAPA Auto Parts Honda completes the front row. Teams will practice from 12:30 to 4 p.m. Monday with race engines that were installed after qualifying. They will have their final one hour practice on Friday’s “Carb Day.” The race will be broadcast live on Sunday, May 28 with coverage starting at 11 a.m. EDT.