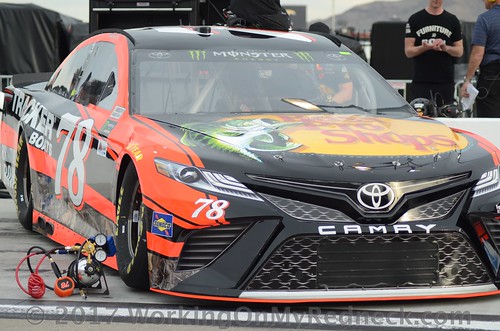 Yates of Fergus Falls, Minn. was killed in action during a heroic maneuver to save the life of a fellow comrade on Oct. 17, 1968 in the Vietnam province of Quang Tri. He was 26 at the time of his death.

The tribute to Yates on the windshield of Truex’s Furniture Row Racing’s No. 78 Bass Pro Shops/TRACKER Boats Toyota is part of NASCAR’s 600 Miles of Remembrance, which honors military service members who paid the ultimate price to defend freedom.

“I couldn’t be more proud of my cousin for his love of God, family, country and the Marine Corps,” said Woody Boyd, chief operating officer (COO) at Furniture Row. “His commitment and ultimate sacrifice inspired me to become a Marine six years later.”

Yates was awarded a cache of medals for bravery, including the Navy Cross, which is the United States military’s second-highest decoration awarded for valor in combat.

Along with the Navy Cross Medal, Yates’ collection of medals for meritorious service in combat included the Silver Star (third highest decoration for valor), the Republic of Vietnam Gallantry Cross with Bronze Star, two Purple Hearts, a Rifleman Badge, the Good Conduct Medal and many more.

Yates received a battlefield commission, Second Lieutenant, effective Oct. 15, 1968 but did not know about it before his death two days later.

“This weekend is more than racing – it’s a time for Americans to remember and pay tribute to our military service members who gave their life so we can enjoy our freedom,” said Truex, who is the defending champion of the Coca-Cola 600. “As I learn the courageous background of 2nd Lt. John Yates during his time in Vietnam he is without a doubt a true American patriot.”