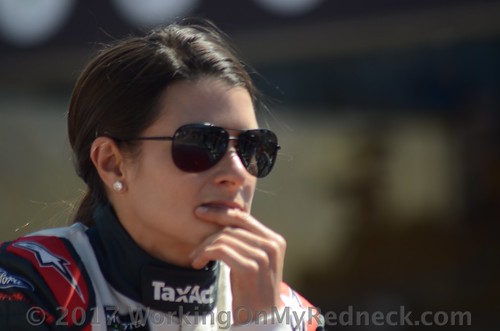 ● The No. 10 “Wonder Woman”/One Cure Ford Fusion team dropped to 27th in the initial laps of Stage 1 as Patrick battled a loose-handling racecar. Later in the stage the car developed a tight-handling condition as Patrick ran the high line.

● The team pitted a total of three times for fresh tires, fuel, air pressure and packer adjustments, and tape was added to the grille to address the handling issues.

● When the team pitted at lap 52, NASCAR penalized Patrick for speeding on pit road. She had to restart at the tail end of the field in the 33rd position when the green flag waved at lap 55. In the final laps of the stage, Patrick raced her way back up to the 23rd position.

● After the adjustments made in the first stage, the No. 10 “Wonder Woman”/One Cure Ford’s handling significantly improved as the team entered Stage 2, and Patrick worked her way into the top-15.

● Patrick was scored as high as 11th before ending Stage 2 in the 12th position.

● The team pitted three times during the stage for tires, fuel and adjustments.

● Patrick ran as high as 10th in the final stage and was scored in the 11th position when the field went back to green at lap 198. On the following lap, she was collected in a multicar accident in turn one.

● The No. 10 “Wonder Woman”/One Cure Ford sustained significant damage, and the team was not able to continue, relegating Patrick to a 36th-place finish.

● Following the accident, Patrick was evaluated and released from the infield care center.

● She is now ranked 33rd in the driver point standings.

“We were having a really good race and having fun out there and had a lot of speed. I kind of felt like Wonder Woman for a little while. All I know is that I all of a sudden I was crashed. Joey (Logano) said he had a failure and that’s what caused it. I hope Aric (Almirola) is okay.”