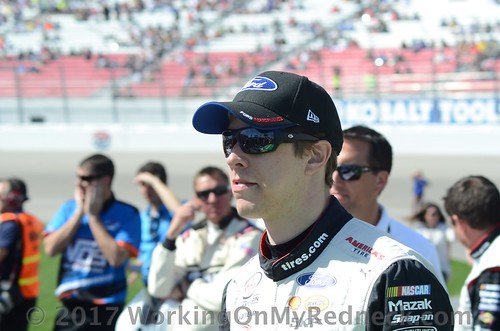 Recap: Brad Keselowski and the No. 2 Fitzgerald Glider Kits team began the day with plenty of confidence that they could win another Monster Energy NASCAR Cup Series race at Talladega Superspeedway, but had to settle for a hard-fought, seventh-place finish. Keselowski began the race from the third position, but quickly moved his green and black Ford  Fusion to the front of the field at lap 15. He would take his Fitzgerald Ford the distance in the first stage for the second stage win of the year for the No. 2 team, picking up a valuable playoff point in the process. The 2012 series champion remained at the front of the field as the second stage began, but fell back to the 24th position prior to a caution flag at lap 82 while trying to make his way to pit road for a green-flag stop prior to the yellow flag being displayed. After initially finding it difficult to get back through the field, Keselowski eventually worked his way back to the 13th position by the end of the second stage. A two-tire pit stop during the break gave Keselowski much needed track position as he restarted the race in the third position. The four-time Talladega winner was able to assume the lead again at lap 119, leading until most of the Ford Performance cars elected to pit together at lap 150. Unfortunately, at lap 169, Keselowski was caught up in a multi-car accident. The damage to the nose of the Ford was not terminal and great repair work by the No. 2 team allowed Keselowski to still compete at a high level for the remainder of the race. A late-race caution at lap 186 forced the race into an overtime finish where Keselowski crossed the finish line in the seventh position.

Quote:  “We survived. We had a good restart there at the end and just couldn’t get to the front. We had a good day. We won the first stage and was really proud of the No. 2 Fitzgerald Glider Kits team. After that, we just kept getting pinned back. I tried to pit and the yellow came out when we pitted and lost track position in Stage 2. We fought back and did the best we could and then the big wreck happened and got torn up. It just seemed like when we needed to catch a good break we caught a bad one.”

Recap: Joey Logano started 12th and finished 32nd in the No. 22 Shell-Pennzoil Ford Fusion after running at the front of the pack for the majority of Sunday’s GEICO 500 at Talladega Superspeedway. Logano entered the race as the most recent Monster Energy NASCAR Cup Series winner and the most recent victor at Talladega Superspeedway, having won the 2016 fall event. Wasting no time, Logano quickly moved the No. 22 Ford into the top-five where he ran for a majority of the event. On the first stop of the day, crew chief Greg Erwin opted for a fuel-only stop, returning Logano to the track inside the top-10. Logano reported the handling of the No. 22 Ford to be loose, particularly with a full fuel load and worn tires. Erwin continued to call for wedge and air pressure adjustments throughout the race, working incrementally on the handling until the fourth pit stop of the day when Logano reported the balance was good enough he could make the moves he needed to in the draft. At lap 160, the caution flag was displayed once again, setting up a treacherous late race restart. Logano was battling his way back to the lead when contact between the No. 47 and No. 24 resulted in the “Big One”, collecting the No. 22 Ford as several cars overturned in the carnage. Although the wreck ended the team’s day 20 laps from the finish, Logano did collect valuable points in the first stage of the event.

Quote: “I saw Chase tank-slapping it down the backstretch.  I was hoping he’d turn to the left when he started spinning, but he went up the race track and I was just sitting there in the outside lane saying, ‘Oh, I’m gonna be the first one there and I can’t get away from him.’  So we got into the crash, unfortunately.  That’s kind of a bummer.  It’s part of it and part of superspeedway racing.  Sometimes you win these things and sometimes you get caught up in them.  We’ll move on and hit the next race.”