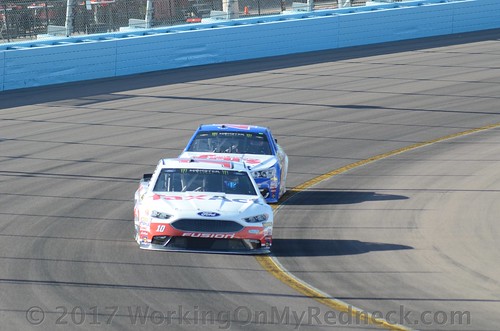 ● The No. 10 Code 3 Associates Ford Fusion sustained nose damage at the start of the race, but the team was able to make repairs when the caution flag waved at lap 17.

● Patrick predominantly ran in the top lane of the draft and was scored in the eighth position at the end of the stage.

● The team made an extended pit stop at the end of Stage 1 for further repairs to the nose of the No. 10 Aspen Dental Ford. Crew chief Billy Scott called Patrick back to pit road at lap 61 to top off with fuel before the start of Stage 2.

● The No. 10 team pitted twice during the stage for tires and fuel.

● Patrick ran the top, middle and bottom lines during Stage 2 but wasn’t able to make up as much ground as she did in the first stage. She was scored as high as 14th before ending the stage in the 15th position.

● The No. 10 team pitted under green-flag conditions at lap 150 for right-side tires and fuel. Patrick noted a vibration during the following run, so Scott called her to pit road when the caution flag waved at lap 162 for tires, fuel and additional repairs to the nose of the No. 10 Aspen Dental Ford.

● Patrick raced as high as eighth during the final stage of the race. But when the caution flag waved at lap 169, Patrick went low to avoid a multicar wreck and the No. 32 car clipped the No. 10 Aspen Dental Ford in the left rear. The contact turned Patrick and sent the car into the inside wall. The damage was too extensive for Patrick to return to the track, and the team was relegated to a 38th-place finish.

● A total of 18 cars were involved in the incident that ended the No. 10 team’s day.

● Patrick was evaluated and released from the infield care center following the wreck.

● Patrick earned four points in Sunday’s race at Talladega, which puts her at 114 total points for the season thus far. She is ranked 31st in the driver point standings heading into next weekend’s race.

“I was told to go low, and I just got spun. There was a lot of smoke, and it was hard to see. I really thought that everybody was doing a great job all day long. We were running two-, three-, four-wide all day long, and nobody was getting too crazy. It’s to be expected. That’s part of the excitement of superspeedway racing. We had another really fast Aspen Dental Ford, we just couldn’t get to the finish.”