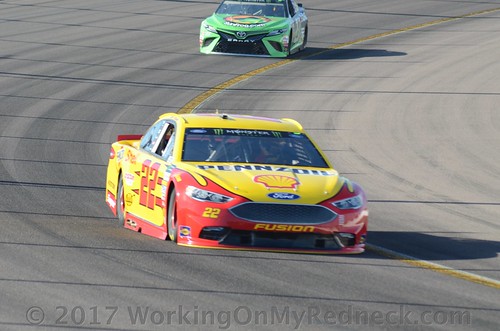 It took Joey Logano all afternoon to drive from the back of the field to the front in Sunday’s Toyota Owners 400 at Richmond International Raceway.

Logano started from the rear after a post-qualifying transmission change, but when the checkered flag waved after Lap 400, the driver of the No. 22 Team Penske Ford was at the head of the field, having held off a banzai charge from teammate Brad Keselowski during a 19-lap green-flag run.

Logano took the lead for the first time on Lap 384, after restarting behind six cars that had stayed out on old tires under caution for Ryan Blaney’s contact with the Turn 3 wall on Lap 377. On fresh rubber, Logano made short work of the cars in front of him and passed series leader Kyle Larson for the top spot with 16 circuits left.

Keselowski had a faster car, having led 110 laps, but he also had more difficulty getting through traffic after the final restart. By the time Logano took the checkered flag, Keselowski had narrowed his teammate’s straightaway lead to roughly three car-lengths before running out of time.

The 26-year-old from Connecticut won his 18th race in his 300th start in the Monster Energy NASCAR Cup Series. It was his first victory of the season and his second at Richmond.

Logano and Keselowski had stayed out under the penultimate caution on Lap 367 and appeared vulnerable to the Joe Gibbs Racing Toyotas of Denny Hamlin and Kyle Busch until NASCAR called the final yellow five laps after the restart on Lap 377.

Of the cars that came to pit road on Lap 378, Logano was first off and lined up behind the six cars that stayed out—those of Larson, Ricky Stenhouse Jr., Chris Buescher, Martin Truex Jr., David Ragan and Cole Whitt. Busch drew a penalty for a commitment line violation and went to the rear of the field, eliminating one of the contending cars.

“The caution came out,” Logano said of the final yellow. “The boys had a great stop which gave us good track position to pass the cars that stayed out. We were able to have a good start, work our way past those cars and tried to take off the best I could. I knew the 2 (Keselowski) was so much faster than everybody, and I had to get out there as quick and as far as I could.

“He was on his way to catch me. I think he was catching me a couple tenths a lap. That was all I had inside the car, and I burned them up early trying to go. I’m proud of the effort of the team. We executed under pressure today and brought a car home that was a fifth-to-10th-place car to Victory Lane.”

For his part, Keselowski was philosophical about the way the race unfolded.

“I was just hoping for another restart or the race to get extended for another 10 laps,” Keselowski said. “I think we had a ton of long-run speed today. That short run at the end…half the field came, half the field didn’t. I just got stuck in a lane of cars that didn’t go.

“By the time I did, he (Logano) had a whole straightaway on me. I got it down to a couple of car-lengths at the end. All and all, I’m happy for Team Penske with the 1-2 finish. We’ll take it and move on.”

Virginia native Denny Hamlin ran third, but his No. 11 Joe Gibbs Racing Toyota couldn’t match the speed of the Team Penske Fords. Ricky Stenhouse Jr. recovered from a brush with the Turn 3 wall to come home fourth on older tires, holding off fifth-place Kevin Harvick over the final green-flag run.

Editor’s Notes: Dale Earnhardt Jr. finished 30th in his first race following his announcement of retirement from the Monster Energy NASCAR Cup Series at the end of the season. Hendrick Motorsports teammate Jimmie Johnson pinched Earnhardt’s No. 88 Chevrolet into the outside wall on Lap 343 to cause the sixth caution. “I had no clue anybody was out there—my apologies,” Johnson said on his team radio… Stenhouse posted his second top five of the season, matching his result at Phoenix… Kurt Busch continued to have electrical problems with his No. 41 Ford. His air-conditioning failed, even though the team had replaced the unit before the race. Busch nevertheless rallied to finish eighth after falling a lap down and getting it back as a “lucky dog” under the fifth caution.

Check out the unofficial results of the Toyota Owner’s 400.