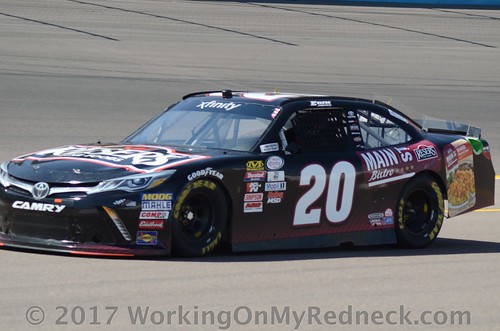 Erik Jones found the ideal way to atone from a mistake in Saturday’s Fitzgerald Glider Kits 300 at Bristol Motor Speedway, but it took a bump-and-run for Jones to complete his comeback at the .533-mile short track.

Recovering from a Lap 230 pit road speeding penalty that sent him to the back of the field, Jones worked his way to the front through a series of quick cautions and muscled Ryan Blaney out of the way to take the lead on Lap 280 of 300.

Jones held the top spot the rest of the way, through a caution that slowed the race after William Byron, Justin Allgaier, Brennan Poole and Austin Dillon were involved in a Turn 4 wreck on Lap 291. The race restarted on Lap 298, but Blaney couldn’t get to Jones’ bumper to return the favor before the checkered flag waved.

“It was just hard racing,” said Jones, who won his second straight NASCAR XFINITY Series race of the season, his second at Bristol and the eighth of his career. “We ended up racing hard and getting by him. To come back from a pit road penalty like that, it’s a race I won’t forget for a long time – just an awesome day.”

Blaney led the field to a restart on Lap 278, but Jones had superior speed on the short runs and quickly pulled up to Blaney’s bumper. As they raced hard into Turn 1, Jones applied the bumper of his No. 20 Toyota, sent Blaney’s No. 22 Ford up the track and made the decisive pass.

“You can’t do that, so I took a chance, and we had some contact. Fortunately, we were able to get a restart in fourth (on Lap 298) and get to second and just couldn’t quite get close to make a run at him.”

To Jones, the bump was justified by late-race urgency and the relative speed of his car.

“At that point in the race I think there was less than 20 (laps) to go, and you have to do all you can to try to get to the lead,” he said. “I knew clean air was important, and we were quite a bit faster than the 22 just to fire off, and I guess just the track cooled down and we got some speed back in the car.

“We were able to get around him and get the lead, and from there, I think everyone was stuck on the bottom, and we were able to hold them off.”

It was a race of radically changing fortunes, and not just for Jones. Polesitter Kyle Larson led 180 laps, but cut a tire after contact with Brandon Jones’ Chevrolet on lap 261 – an incident that started a chain-reaction wreck that eliminated Cole Custer, Darrell Wallace Jr. and Garrett Smithley.

Larson compounded his issues with a penalty for a commitment line violation but came from the rear of the field in the final 30 laps to finish seventh.

Sunoco rookie Daniel Hemric came from a lap down to win the $100,000 Dash 4 cash bonus after the three other qualifiers for the XFINITY-sponsored prize – Custer, Allgaier and Brendan Gaughan – all were involved in accidents.

Check out the unofficial results of the Fitzgerald Glider Kits 300.