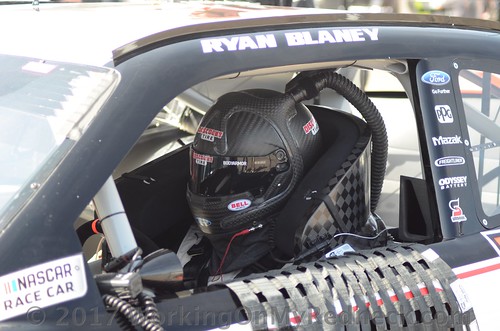 Recap: Ryan Blaney and the No. 22 Fitzgerald Glider Kits Ford Mustang team continued its strong start to the 2017 NASCAR XFINITY Series (NXS) season with their fourth-consecutive second-place finish in Saturday’s Fitzgerald Glider Kits 300 at Bristol Motor Speedway. The 23-year-old started from the ninth position in his Mustang, but it did not take long before Blaney cracked the top-five. By the end of the first stage on lap 85, Blaney had raced his way to the second position. The third-generation driver radioed to crew chief Greg Erwin the car was building tight on the long run, so Erwin and the team made minor adjustments to loosen up the Ford. Once the second stage started, Blaney fell to the third position, where he would run some of the fastest laps of any cars in the race. Blaney was catching the leaders before rain forced a lengthy red flag on lap 162. Once the track was dry, Blaney restarted third and battled for the lead as the second stage ended on lap 170. After another round of pit stops, Blaney cycled out to be the race leader and would go on to lead 61 laps throughout the remainder of the race. After contact with the No. 20 of Erik Jones on lap 279 while leading, Blaney fell to the fourth position, but was able to make his way back up to second. The finish gives the No. 22 team seven top-10 finishes to start the season, helping the team remain as the leader in the NXS Owners’ Points Championship standings.

Quote:  “We struggled the most there and I feel like that’s where their cars are really fast.  The 20 and the 18 were super, super good on short runs and we needed about 25-30 laps and we could really get going and we put a big distance on those guys, but I had to protect.  We’re the leader and we know the bottom is dominant and I had to protect.  I knew I pushed the issue with him.  I knew he was close and I don’t blame him for not backing out at that time.  You can’t do that, so I took a chance and we had some contact.  Fortunately, we were able to get a restart in fourth and get to second and just couldn’t quite get close to make a run at him.”