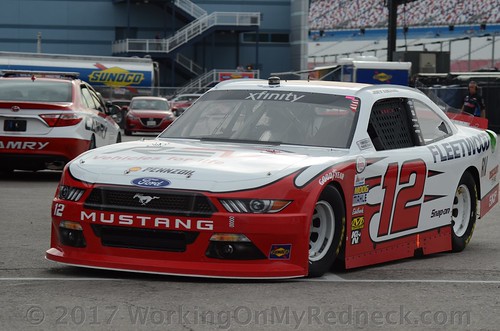 Recap: Joey Logano started on the pole and had a No. 12 PPG Paints Ford Mustang fast enough to run inside the top three all day long, but succumbed to an engine issue with just under 60 laps to go to finish 34th in Saturday’s NASCAR XFINITY Series (NXS) race at Texas Motor Speedway.  Logano earned his 33rd-career NXS pole earlier on Saturday and his second-straight this season (Auto Club Speedway), then jumped out to an quick lead on what proved to be a one-groove track.  Logano led the first 19 laps before falling back to third, where he would ride until the end of stage one.  Logano slipped back following the first round of pit stops as several teams elected to take two tires and crew chief Brian Wilson called for four on the No. 12.  It didn’t take long for Logano to race back to second and he would run in the top-five until another round of pit stops just before the end of the second stage. For the rest of his race, Logano would run third to Erik Jones and teammate Ryan Blaney.  However, on lap 142, Logano radioed in that he thought his No. 12 PPG Paints Mustang had dropped a cylinder.  After a couple more laps and a diagnosis on pit road, the team elected to pull the car behind the wall and retire from the event. The 34th-palce finish is just the fourth time in Logano’s 162-career NXS races that he’s finished 30th or worse.

Quote:  “I think we dropped a valve or something like that. Maybe lost a cylinder. It is just a matter of time before it was going to make a big explosion and wreck our race car. This car doesn’t race for points so it is win or nothing for us. It is unfortunate because we were running third and really good on the long run. We weren’t good on the short run and we lost a lot of time there. I was hoping for a caution at the end and a good pit stop to put us in position to win. Things happen sometimes. It is part of racing. As long as it is today, not tomorrow.”

Recap: Ryan Blaney and the No. 22 Discount Tire Ford Mustang team continued its strong start to the 2017 NASCAR XFINITY Series (NXS) season with their third-consecutive second-place finish.  The 23-year-old started his Mustang from the fourth position in the My Bariatric Solutions 300 at Texas Motor Speedway on Saturday afternoon. Starting on the outside lane of the newly-repaved Texas Motor Speedway, Blaney did not have much grip on the initial start, causing him to fall back to the ninth position. It did not take long before Blaney cracked the top-five and ran the fastest laps on track. By the end of the first stage, Blaney had raced his way up to the second position. The third-generation driver radioed to crew chief Greg Erwin his Ford Mustang was building tight on the long run. During the first pit stop, Erwin made minor adjustments to loosen up the No. 22 Mustang. Once the second stage started, Blaney would work his way up to the lead before pitting again on lap 85. As the final stage began on lap 97, Blaney continued his strong run.  Restarting third, he battled the top cars for position until becoming the race leader. Blaney lost the lead on 148 to race winner Erik Jones during green flag stops. Blaney crossed the finish line in the second position, giving the No. 22 Discount Tire team six-consecutive top-10 finishes to start the season, helping the team remain as the leader in the NXS Owners’ Points Championship standings. This was Blaney’s third top-five finish in four races at Texas Motor Speedway.

Quote:  “I thought our car was pretty good all day. The 20 seemed to be a little better than us for 35 or 40 laps. Then I feel like we could start running him down. We passed him before the last pit stop and I thought our car was pretty decent right there. I needed to turn a little better early in a run. I knew it wasn’t going to be that long for the next stint. We didn’t come out with the lead and that hurt us. I think if we would have come out with the lead I don’t know if I could have held him off. He was pretty good right away but we kind of over adjusted and got too free that last run. I felt like we were kind of even with them 10 laps into a run but then he got so far out ahead that we couldn’t run him down. Just couldn’t get there. I thought it was a solid weekend overall for the 22 group. I felt the way the car has been running on that side is promising. It has been second a lot this year and that team deserves a win. They have been working hard the past six months to get competitive again and be in position to win races. We just need to have one go our way.”