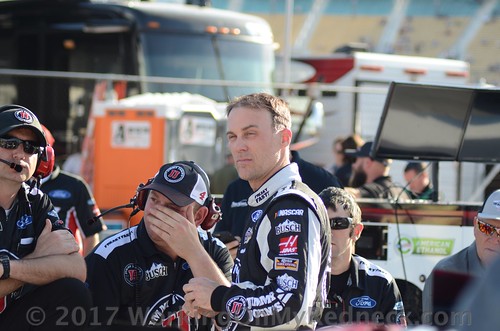 ● The No. 41 Hunt Brothers Pizza Ford Mustang stayed out under caution on lap 12 while racing in the 13th position.

● The team pitted under caution for four tires, fuel, wedge and track bar adjustments to give the car more turn through the center of the corner at the conclusion of Stage 1.

● Harvick received damage to the right rear of the No. 41 Ford, when he attempted to avoid a wreck directly in front of him on lap 66.

● Harvick came to pit road under caution on lap 86 for four tires, fuel and a wedge adjustment and restarted 19th on lap 88.

● He gained five positions in the final two laps of Stage 2 on new tires.

● The No. 41 team opted to stay out following the conclusion of Stage 2 while many of the leaders came to pit road allowing the team to pick up an additional nine positions.

● Harvick came to pit road under caution on lap 158 for four tires, fuel and a wedge adjustment to help the car turn the center of the corner better in Turn 1 and 2.

● He raced the No. 41 Hunt Brothers Pizza Ford Mustang up to the third position with 40 laps to go and maintained that position for the remainder of the event.

“I thought our day was really good when the car wasn’t beat up like it was at the end. We had better speed. We were okay after the crash but for the second time out and six weeks in and everything that we have going on, putting both cars in the top-five is a huge day for us. Everybody on our Hunt Brothers Pizza team is doing a good job. We know we have some areas to work on to be better. Hopefully we can continue to do that and come back to Charlotte.”