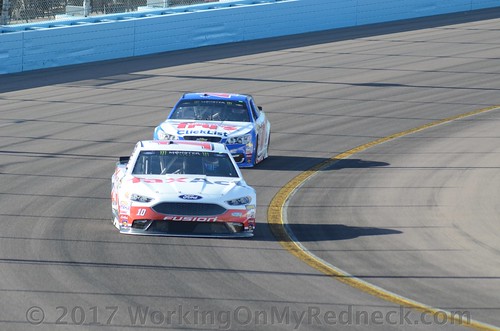 ● The No. 10 TaxAct Ford Fusion was scored as high as 13th during the first stage and was solidly inside the top-20 until Patrick had to restart on the outside line at lap 15. She dropped back to 27th before she could get down to the preferred bottom groove.

● Patrick pitted once during the stage and then again when Stage 1 concluded. The team made air pressure adjustments and added a spring rubber to the left-rear spring to improve the car’s balance.

● With the adjustments the team made prior to the start of Stage 2, Patrick reported the handling of the No. 10 TaxAct Ford was better, which helped her to gain some ground.

● The team pitted twice during the stage at laps 123 and 165 for tires, fuel and adjustments.

● The seven lead cars remained on track when most of the field pitted at lap 165 during Stage 2. Those teams had to pit prior to the start of Stage 3, which put Patrick 12th for the lap-177 restart. Restarting on the outside once again negatively impacted Patrick’s run and dropped her all the way back to 19th before she was able to get down to the bottom groove.

● Patrick went a lap down to the leader at lap 244 during a long, green-flag run.

● The No. 10 TaxAct Ford team pitted twice during Stage 3. When Patrick pitted the second time at lap 280, she was penalized by NASCAR for driving through too many pit stalls on entry into her pit box and had to serve a pass-through penalty. The penalty put Patrick two laps down to the leader and dropped her to the 27th position.

● When the caution flag waved at lap 299, crew chief Billy Scott called for Patrick to stay out and wave around to get a lap back. In the closing laps, Patrick was able to pick up several positions and took the checkered flag in 24th.

● Patrick earned 13 points in Sunday’s race at Texas, which gives her a total of 90 points for the season thus far. She is ranked 29th in the driver point standings.

Danica Patrick, driver of the No. 10 TaxAct Ford Fusion for Stewart-Haas Racing:

“The TaxAct Ford was pretty good in the middle of the second stage, and we were able to pick up a few spots, but then it just started getting looser and looser. The team made good adjustments to help tighten the car up, but then it would start getting loose again as we got into the run. I hate we got a penalty there toward the end that cost us a bunch of spots.”