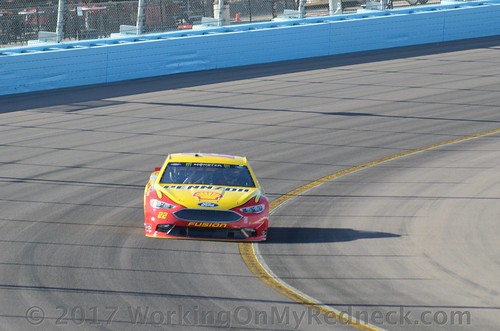 Recap: Brad Keselowski and the No. 2 Miller Lite Ford Fusion team nearly extended their streak of top-five finishes to six before finishing sixth in Sunday’s 500-mile race at Texas Motor Speedway. One week after winning at Martinsville Speedway in Team Penske’s 1000th Monster Energy NASCAR Cup Series race, Keselowski began Sunday’s race in the fifth position. He easily settled into the top five until a NASCAR-mandated competition caution came at lap 30. Crew chief Paul Wolfe brought his driver down pit road for two tires and fuel, which nearly got Keselowski out at the front of the field. He was still able to restart inside the top five, but starting out front would have helped alieve the handling of the Miller Lite machine that was loose on entry and tight on corner exit. Keselowski was able to finish the first 85-lap stage in the fifth position to score five bonus points. As the second stage began, Keselowski lost a few positions on track due to the same handling conditions, but he was still able to maintain a spot inside the top 10. A late-stage caution flew a lap 164, allowing Wolfe to bring Keselowski down pit road prior to the end of the stage to set them up to stay out and restart at the front of the field. The final stage began with Keselowski manning the second position, eventually moving to the lead as pit stops began at lap 221. A long, green-flag run at the end of the race gave Keselowski an opportunity to work on moving his way to the front of the field. After a valiant effort over the waning laps, Keselowski crossed the finish line in the sixth position for his sixth-consecutive top-10 finish.

Quote:  “We just seemed kind of stuck in that fifth to sixth-place range with the Miller Lite Ford Fusion. We were fighting a few things throughout the day and we got a little better there at the end. I think we had a little bit more in the tank if there was more time left. Unfortunately we just ran out of laps.”

Recap:  Joey Logano used a gutsy pit call by crew chief Todd Gordon to finish a season-best third in Sunday’s Monster Energy NASCAR Cup Series race at Texas Motor Speedway.  Logano qualified fourth for the 500-mile event and moved up to third less than 20 laps into the first run, but began to struggle with an ill-handling car that was loose in and tight in the center as the race played out.  Logano would run anywhere between sixth and 10th over the first 100 laps.  However, the handling on the No. 22 Shell-Pennzoil Ford Fusion continued to worsen and Logano began to fall through the field.  The one-lane racetrack proved detrimental as Logano continually started on the outside and would lose three or four spots on each restart.  Just past halfway, Gordon decided to work on a different pit strategy to try and gain Logano track position, keeping him on the track longer as others made green flag pit stops.  It eventually put Logano on a one-stop strategy to end the race where everyone else had to make two.  Following his final pit stop on lap 291, a timely caution just 20 laps later saw the rest of the field come to pit road and the No. 22 Shell-Pennzoil Ford stay out. With less than 30 to go, Logano took the lead and held on to the top spot, but eventually fell into the clutches of eventual winner Jimmie Johnson.  Logano would finish third, his best points-paying finish of the season.  The top-three run keeps Logano fifth in the MENCS point standings, 72 points behind leader Kyle Larson.

Quote:  “That is Todd’s (Gordon) top-three there. He did a good job giving us a shot to win. I tried to hold of the 48, he was just faster. There is nothing to say besides that. I was in the clean and had the clean air and he was still faster behind me. Once he passed me, my car kind of came to me a little bit and I was able to run him back down a little bit. If he had made a mistake I was going to be there. He was loose, I could tell, then all of a sudden he wasn’t loose anymore. He must have lowered his track bar or something and he drove away again. My car started falling off like it did all day. I needed a 15 lap run instead of a 30 lap run, or a couple cautions in three and we would be standing in victory lane with a 12th place car and that would have been something.”