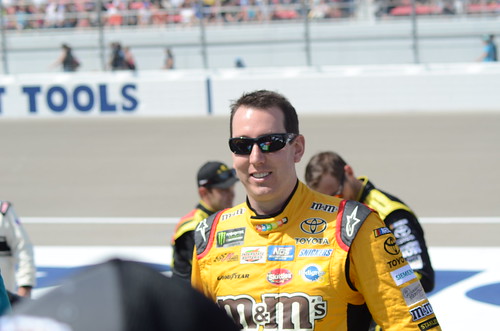 To five straight questions, Busch answered with some variation of the following: “Everything’s great. Looking forward to getting back to the race track and back in my race car.”

Everything wasn’t so great for Busch last Sunday in Las Vegas, when, during a battle for third place, Joey Logano’s Ford slid up the track into Busch’s Toyota on the last lap of the . Busch spun toward the inside wall and eventually finished 22nd.

Logano saved his car and came home fourth, only to have Busch launch an overhand right haymaker in his direction on pit road. When Logano’s crew members jumped into the fray to protect their driver, Busch was taken to the pavement and wound up with a bloody cut to his forehead.

That’s why NASCAR summoned both Busch and Logano to the hauler on Friday morning at Phoenix International Raceway, site of Sunday’s Camping World 500 (3:30 p.m. ET on FOX), the fourth Monster Energy NASCAR Cup Series race of the season.

“It’s an emotional sport,” said Steve O’Donnell, NASCAR executive vice president and chief racing development officer. “We still view that as two drivers racing hard for position. If that escalates beyond that to someone doing something intentional on the race track, we were very clear that we’ll react.

“But we’re moving on, and we want to see a great race here in Phoenix.”

Logano has repeatedly acknowledged he made a mistake as he battled Busch for position, and at Busch’s request he brought data to the meeting to prove his point.

“I told him that we obviously made contact on the back straightaway,” Logano said. “I had a not very good entry (into turn 3) and had to slow down the car a lot to stay on the bottom and tried to make up some of that speed at the bottom of the race track and then I got loose. Once you get loose once, then I was on his door. You get loose again, and at that point that was it. That is my mistake. I tried to stay on the bottom but my car didn’t stay there.

“There could be six or seven different reasons why that happened, but the fact of the matter is I tried to stay on the bottom, I made a mistake and got up into him. I hate that it happened. I would take it back in a heartbeat. He asked for data when we talked on the phone (during the week), and I was able to bring that with me and present that and try to explain what was going on inside my race car. We try to move on from there.”

How quickly Busch will move on remains to be seen, and his rote answers after Friday’s meeting gave little insight as to his real feelings on the matter.

TIL NEXT TTIME, I AM STILL WORKING ON MY REDNECK!