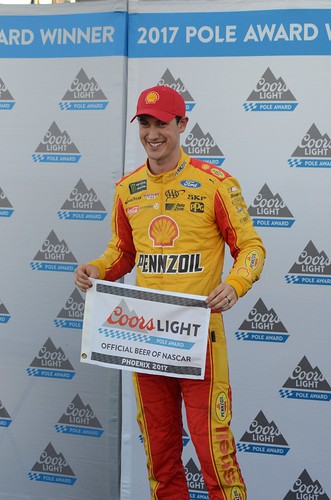 (photo courtesy Leon Hammack)
Joey Logano, driver of the No. 22 Shell Pennzoil Ford, continued his hot streak in the desert at Phoenix International Raceway on Friday’s Gatorade Pole Day. The 26-year-old followed up his win in last November’s Can-Am 500 by turning in the fastest lap in qualifying to capture pole position for Sunday’sCamping World 500.

“The guys did a great job on our Shell Pennzoil Ford,” said Logano. “When we were going down the front straightaway, I thought I had a pretty good one and two, I was able to hook the bottom, pretty good there. I didn’t think it was going to be quite good enough, but I pushed as hard as I could. Sometimes you overdrive it a little bit and you still can make some heat. I’m proud of this team, proud of our Ford Front Row, so it’s a pretty special deal. Time to race now.”

This is Logano’s first Monster Energy NASCAR Cup Series pole at Phoenix Raceway and his fourth overall at Phoenix – he has started first in XFINITY series races in 2010, 2012 and 2015. Logano won Gatorade Pole Day by touring the legendary one-mile oval with a lap of 137.321 mph. He will be joined on the front row by Ryan Blaney, driver of the Wood Brother’s No. 21 Motorcraft/Quick Lane Tire & Auto Center Ford. Blaney’s second-best qualifying performance today was his career best in NASCAR’s top series.

“I thought we had a lot of speed all day, which is really nice,” Blaney said, “It’s nice to have good starts the past two weeks, we’ve been third and second this week. We’re creeping up on it. I really wanted the pole. I’ve never been a great qualifier, so it’s something we’ve been working on as a team, I think we’ve got a really fast Motorcraft/Quick Lane Ford Fusion, and the other side is pretty good as well. It’s nice to be out in Phoenix. I’ve always liked this place, so it’s going to be a good race Sunday.”

Rounding out the top five were No. 88 Dale Earnhardt Jr., No. 42 Kyle Larson and No. 1 Jamie McMurray. Logano’s Penske teammate, Brad Keselowski, driver of the No. 2 Alliance Truck Parts Ford, qualified sixth in the second Team Penske entry.

The three-stage, knock-out style qualifying format saw Kyle Larson win the first round as the field was trimmed to 24 competitors, while Logano won the second stage as the eligible group for the pole was reduced to 12.

Blaney also had a strong showing in NASCAR XFINITY Series action leading up to Saturday’s DC Solar 200. Driving Team Penske’s No. 22 Discount Tire Ford, Blaney posted the top-two times in all three practices for Saturday’s featured event, including the fastest time in the second session. Erik Jones, driver of the No. 20 Reser’s Main St. Bistro Toyota, was fastest in the first session, and Brendan Gaughan, driver of the No. 62 South Point Hotel & Casino Chevrolet, was quickest in final practice.