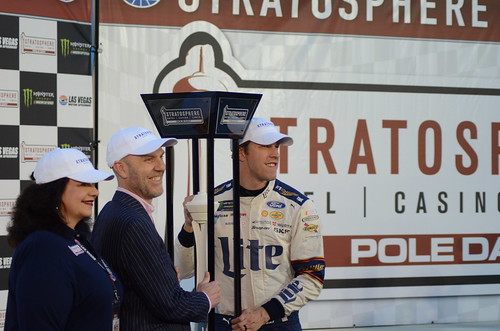 Then he blew away the rest of the field.

The Coors Light Pole Award was Keselowski’s first of the season, his first in nine attempts at Las Vegas Motor Speedway and the 13th of his career.

With most drivers in the final round stronger through the first two corners before tightening up in Turns 3 and 4, it is conceivable that missing 1 and 2 actually helped Keselowski’s lap.

“I don’t know what the answer is,” said Keselowski, the 2016 winner at Las Vegas and last week’s winner at Atlanta. “I’ll have to look through a bunch of data, and the smart guys – the engineers and crew chiefs – will probably point some of that stuff out to me. But, yeah, every time I looked at the tracker, the cars that were fast in 1 and 2 weren’t in 3 and 4, and we were the opposite.

Ryan Blaney qualified third after setting the fastest lap of the day (194.147 mph) in the second of the three rounds. Matt Kenseth will start fourth, followed by Kyle Larson and Joey Logano.

Like Keselowski, Truex missed Turns 1 and 2 on the lap that counted but was strong through Turns 3 and 4 in securing his front-row starting spot.

“I felt like we had a pretty well-put-together lap, but it wasn’t perfect,” Truex said. “Not quite as good through Turns 1 and 2 with the bumps as I’d like to be, and it felt like we hit 3 and 4 good. I felt like the bumps in 1 and 2 got us.

“All in all, I felt like we just missed the pace a little bit. We were really strong in practice and thought (the track) would pick up quite a bit of speed tonight, and it didn’t. That threw us a little bit of a curve and kind of hurt our setup. It was a good recovery. We made a lot of changes as qualifying went on and got better at the end. That’s all you can ask for.”

After a strong start to the season in Daytona and Atlanta, the Stewart-Haas Racing cars were sluggish in Friday’s time trials, with none of the four advancing to the final round. Series leader Kevin Harvick will start 19th on Sunday, two spots behind Daytona 500 winner Kurt Busch.

Clint Bowyer was the fastest of the SHR drivers, earning the 13th starting position after missing the final round by .001 seconds.