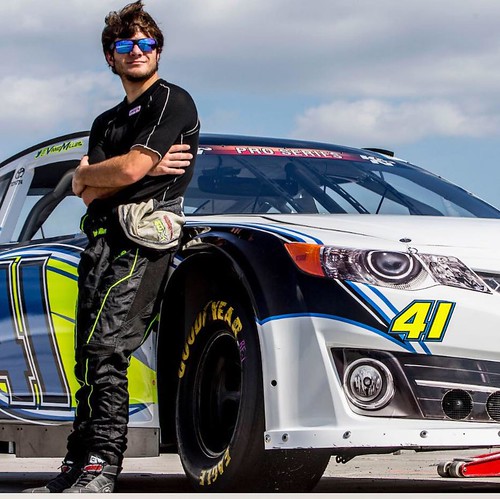 A few weeks ago I was in contact with one of the NASCAR PR reps that I worked with last year, Sandra Vorse.  I was trying to get some press release information for the Camping World Truck Series team that she works with, Wauters Motorsports.  In passing conversation she mentioned that there was an up and coming race car driver that she is representing.  The name of this young man is Vinnie Miller, who is making his debut this season in both the ARCA Series, as well as the K&N Pro Series East.

In keeping with one of my objectives of introducing our readers to some of the young men and women that they may be seeing on Sundays in a few years, here is my conversation with Vinnie Miller.

WorkingOnMyRedneck:  After doing a little research and homework on you I realize that you have amassed a rather long resume for a 19 year old young man.  Vinnie can you tell us just how, when and where  you got into racing?

Vinnie Miller:  When I was 4 years old my grandpa came to me and asked me if I wanted to race quarter midgets.  Being 4 years old I didn’t know anything about racing.  When I was 4 1/2 years old my grandpa got me a quarter midget and I started practicing because you could not legally race til you were 5 years old..  For that reason I entered my first race when I turned five years old.  I really didn’t have a knack for it until I got my first win and that was when I was seven years old.  When I got that first win, at the age of seven, that is when I knew that I wanted to be a professional race car driver and chase my dream.  And that is just what I have been doing for the last 14 or 15 years.

My grandpa was the main supporter, but my grandma, my mom and my dad were also part of the support group.  Today my grandma is the main support, since my grandpa has passed away a couple of years ago.  My dad and my grandpa were always the ones who worked on the race cars.  We competed in quarter midgets for nine years at the national level.  There was a time when we were one of the best teams in the nation.

When I turned 12 years old we moved up to stock car racing at my local track, Owosso Speedway.  I raced Street Stock for two years, Sportsman for two years, and then transitioned into Outlaw Late Models for two years.  Two years ago I moved down too North Carolina, racing super late models.  This year we made the jump  to ARCA and K&N Pro East racing with MDM Motorsports.

WOMR:  Has all your racing experience been pavement racing, or have you raced on dirt as well?

VM:  It has been all pavement racing.  I have never raced on dirt.

WOMR:  Would you like to race a Dirt Late Model or a Sprint Car?

VM:  I don’t know if I would like to race late models or sprint cars on dirt.  It would be cool.  But, because I don’t think that we have the budget for that any time soon, I wouldn’t mind getting into an outlaw kart on dirt for that experience.  Yeah since I have never been on dirt it would be fun.  If you wad up a dirt late model or a sprint car you are looking at about $15,000.00 worth of damage.  If you wad up an outlaw cart it might be a $1,000 to fix it!

WOMR:  Vinnie how did your ARCA and K&N East deals come about?

VM:  One of the guys that I raced against for most of my career, from age 12-17 years old, at Owosso Speedway, moved down to North Carolina a couple of years ago.  Once down there he got involved with Spier Entertainment.  He recruits drivers and places them with race teams.  This year he came to me and wanted to help me have a chance to progress to the next level of racing.  He matched us up with MDM Motorsports and now is my agent.

WOMR:  Have you already competed in a K&N East race in Florida?

VM:  Yes I  just raced a couple of weeks ago at New Smyrna Speedway and I really like that track.  My crew chief is Jamie Jones, who I think is a very smart man!  We finished in 13th place for the K&N race there.  But we were in the top 5 all weekend on the speed charts!  We got into some bad predicaments during the race.  If we hadn’t have done that we could have had a top 5-7 place finish.  I really like working with my team.  It is probably the best team that I have worked with and very comforting.

WOMR:  When is your first ARCA race?

VM:  My first ARCA race is the first of April at the Nashville Fairgrounds Speedway.  I have been there before in a late model so it won’t be like I am racing there blind.

VM:  Obviously I want to win every race.  That is what every race car driver wants to do!  MDM Motorsports has really top equipment and I think that I could be a top 5 to a winner in each of those races. As long as I do my job and give them good feedback we should do well.  I think that we have a very good shot every time we unload.  We have the car to go out and win a race.  I think that driving an ARCA or a K&N car is easier than driving a late model car.  So I think that I will do better this year than I have done in the past few years.

WOMR:  What is the longest race that you have competed in so far?

VM:  The longest race that I have been in was a 200 lap late model race.  I handled it pretty well.  I also had a cool box in the car and that is important because it keeps your brain cooled down.  By being cool and comfortable in the car it makes your job much easier.   The 150 lap K&N race was tougher because the car is about 600 lbs. heavier.  It takes a lot more stamina and endurance to race in the K&N East Series because of that.

WOMR:  Do you find that it those longer races are more mentally tiring?

VM:  Yes and no.  In a late model you do not have as many adjustments that you can make in the cockpit as you have in the other cars and that makes it more mentally tiring.  But in a K&N East car you brake blowers that can affect handling and brake bias adjustments, as well as other tools that affect handling.

WOMR:  Do you have a mentor or someone that you can lean on for advice, techniques, and knowledge, etc?

VM:  I just try to lean as much as I can.  I will take constructive criticism from just about anyone because I know that it will make me a better driver and further my career.  My main mentor is my crew chief.  He has been around a very long a time and he know what he is talking about.  It is also very nice to have Harrison Burton and his dad, Jeff burton, on the MDM Motorsports team as well.  I know that I can lean on them for answers to my questions, as well.

WOMR:  What are you interests away from the race track?

WOMR:  What does your average work week look like these days?

VM:  I have a part-time job that I work at 2-3 days a week to help support my bills.  I am in the shop 2-3 days a week, hanging out with the guys and having lunch with them.  While I am there I try to learn as much as I can about the race cars.  I also try to hit the gym 3 days a week in the mornings to work out.  I normally take one day a week off to just hangout with my friends and go out on the boat.

WOMR:  I know that you are still a very young man, but if you weren’t racing cars what would yo be doing for a living?

VM:  I do have a lot of ideas of what I would be doing if I couldn’t race.  I would like to go back to Michigan and take over my family run machine shop and keep it in the family as long as I can.  Also welding really interests me.  I wouldn’t mind going back to school to learn that trade.

WOMR:  Vinnie, I know that you are just 19 years old.  But I like to end the interviews with this question because it seems to give an insight into the person.  What are yo most proud of?  It can be from your personal life or your racing life.

VM:  I come from a small town where a lot of the kids do drugs and smoke weed and I have never been into that.  So I didn’t have a lot of close friends.  So what I am most proud of is being a good kid, never doing any of that kind of stuff,  just following my dreams, and being able to be where I am at this point in my life.

As you can tell from this conversation with Vinnie Miller, he is a very intelligent, and driven young man.  He has put in time trying to hone his craft of driving race cars, 14 out of his 19 years.  There were two comments that struck me very positively. The first comment was that he will take constructive criticism from anyone with knowledge, because that would only make hime a better race car driver.  That, to me, shows maturity beyond his 19 years.

The second comment that I found to be an indication of his maturity was when I asked Vinnie what he was most proud of.  His answer both surprised and impressed me.  After a short pause for some soul searching, he said that he was most proud of not falling into the trap that many youngsters fall into, drugs and alcohol.  Instead, he has kept his eye on the ball so to speak, keeping focused and learning to be a good race car driver!

That, my friends, says volumes about Vinnie Miller’s drive, his desire, his upbringing, as well as his integrity!

Keep your eyes open for this young gun, you may be hearing more from him in the future.

2 Comments on “Fender To Fender With Vinnie Miller”