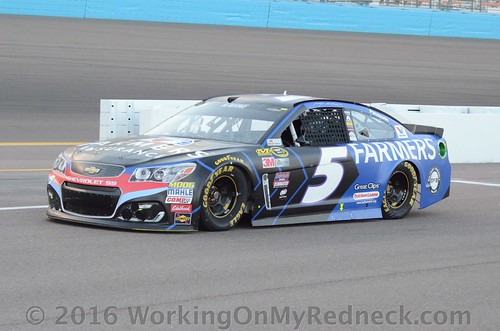 For those that have thought that Kasey Kahne may have gone AWOL (absent without leave) over the last year plus, he made an appearance in the top five finishers at Atlanta Sunday!

Atlanta Motor Speedway is a track that has given Kahne three of his 17 career victories, but the start of Sunday’s Folds of Honor QuikTrip 500 was anything but auspicious for the driver of the No. 5 Hendrick Motorsports Chevrolet.

Kahne started 29th, and early handling problems caused him to lose a lap to race leader Kevin Harvick. But astute adjustments to the car by crew chief Keith Rodden enabled Kahne to regain the lost lap, and a lightning-fast pit stop late in the race put him in position to claim a fourth-place finish.

“We got behind early and just battled and battled,” said Kahne, who posted his best result since a third-place run last October at Charlotte. “Had to battle (Matt) Kenseth for a long time for the lucky dog, and he got it and he drove to the front. I knew he was really good. We just got a lot better. The adjustments were spot on. If we didn’t have those, we would have been two or three laps down.”

In the end, the quality work of Kahne’s crew made a crucial difference.

“The pit stops were really solid, and then our final pit stop was the best stop we had all day at the perfect time,” Kahne said. “That put us in row three (for a restart with 11 laps left), and we were able to get to fourth.

“It was a great race. Our Farmers Insurance Chevrolet really came alive. It was good. It was fun. It was quite the battle. Five hundred miles at Atlanta is a long time to run right on the wall or right on the white line and switch it up.”