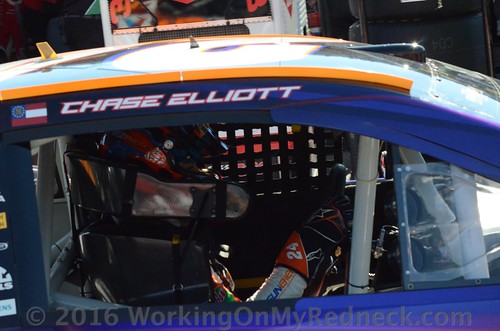 Elliott had a fast Chevrolet, as he proved conclusively after incurring a pit road speeding penalty on Lap 212. Despite serving a pass-through for the infraction, Elliott stayed on the lead lap and was running faster lap times than Kevin Harvick when a debris caution on Lap 240 slowed the field and gave Elliott a chance to regain track position.

When the race restarted on Lap 284 after caution for Clint Bowyer’s hard contact with the Turn 2 wall, Elliott was running second, and he chased Harvick for 25 laps before another caution interrupted the proceedings on Lap 309.

But when Harvick drew a critical pit road speeding penalty on Lap 311, it wasn’t Elliott who capitalized. It was race winner Brad Keselowski. On a restart on lap 315, after a slow final pit stop, Elliott took the green in fourth position in the outside lane – a distinct disadvantage – and fell back to fifth at the finish.

“On that last stop, we had just a little bit of a hiccup that lost us second spot unfortunately, and after Kevin’s misfortune, that would have put us in a really good spot. It’s one of those things where it’s hard to be frustrated at the pit crew, because those guys did a really good job all day long. We made spots up all day and gained time on Kevin.

“Every time I thought we were just inching closer to his back bumper as we came off pit road. I think we have a great foundation on pit road to build off of. I think (it’s) much improved, and just had a hiccup there at the end of the day, but I don’t think it’s something those guys should be discouraged over.”