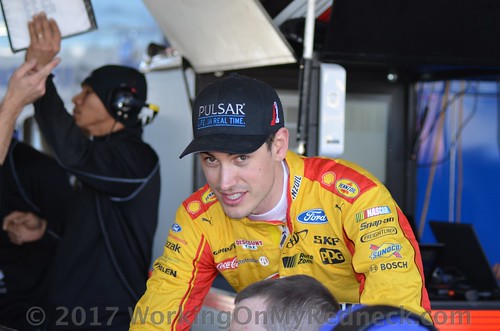 The pit gates at Daytona International Speedway have officially been opened and the loud pedals have been pushed!  While the Saturday night Advanced Auto Parts Clash had to be postponed til Sunday afternoon due to an evening rain storm that hung over the race track all night, the drivers more than made up for the race delay!

When Brad Keselowski and Denny Hamlin collided in Turn 2 on the final lap of Sunday’s rain-delayed Advance Auto Parts Clash at Daytona International Speedway, Joey Logano was there to slither through on the outside to seize the moment.

Charging to the outside and grabbing the lead near the entry to the Superstretch at the 2.5-mile speedway, Logano took the checkered flag 1.121 seconds ahead of runner-up Kyle Busch, who beat third-place finisher Alex Bowman to the stripe by .018 seconds.

Danica Patrick dodged the Turn 2 melee to surge from 10th to fourth on the final lap to post her first top-five finish in any Monster Energy NASCAR Cup Series race, though the result is not official because “The Clash” is an exhibition event with a limited field.

Logano’s victory was the first in “The Clash” for a Ford driver since Dale Jarrett took the checkered flag in 2004.

Joe Gibbs Racing Toyotas settled into the first four spots after a restart on Lap 65, but Team Penske teammates Keselowski and Logano sped toward the front in the outside lane, successfully side-drafted and broke up the Camry armada.

The race was decided when Keselowski challenged defending winner Hamlin for the lead on the final lap. Keselowski, who came home sixth, powered his Ford to the bottom of Turn 2. Hamlin tried to protect his position by trying to cut down to the bottom of the race track and close the door on Keselowski, and the cars collided, Hamlin’s Toyota spinning wildly and Keselowski’s Ford losing momentum off the corner.

Logano pulled out to a 100-yard lead and maintained it as Busch and Bowman battled side-by-side behind him.

“That was the play,” Logano said of the side-drafting strategy. “The Toyotas are so selfless, I guess is the way to look at it. They’re able to work together and think of one car winning, and they’re really good at that.

“We had to think that same way as Ford (drivers), and we Stewart-Haas and the Penske cars, we were able to get a good enough run to work together enough to break them up and make the passes, and then there at the end, it was kind of a mess.

“Everything was going really fast, and I was just in the right place at the right time.”

Even though “The Clash” featured a mandatory caution at Lap 25, and even though the cars had been set up for racing under the lights, drivers were uniformly aggressive in the opening segment, often running three-wide in an attempt to gain track position.

On Lap 17, Kurt Busch fell victim to a handling problem with reigning Monster Energy NASCAR Cup Series Jimmie Johnson’s No. 48 Chevrolet. Johnson got loose in Turn 4 and spun into the right rear of Busch’s No. 41 Stewart-Haas Racing Ford, turning Busch hard into the outside wall.

“I was just minding my own business in the low groove and we got tagged in the right rear,” Kurt Busch said after exiting the Infield Care Center. “It’s kind of a shame — all of the hard work and the effort everybody puts into the off-season — Doug Yates and his engines and everybody from Ford and everybody at Stewart-Haas, all of the effort put toward building a car and we didn’t even make it to the first pit stop, so it’s kind of a bummer.”

Johnson car survived that wreck, but the handling remained evil, and on Lap 49 he spun again off Turn 4 and clobbered the inside wall near the entrance to pit road. The wreck put Johnson out of the race, his sixth straight DNF in the season-opening exhibition event.

With 14 laps left, Martin Truex Jr. tried to fill a hole that wasn’t there and clipped the right front of Kyle Larson’s No. 42 Chip Ganassi Racing Chevrolet. Truex spun in Turn 3, rocketed toward the outside wall and caught the left rear of Chris Buescher’s No. 37 Chevrolet, which needed two trips to pit road to repair the damage.

That wreck set up the wild 11-lap run to the finish that saw the opportunistic Logano take advantage of the last-lap tangle between Keselowski and Hamlin.