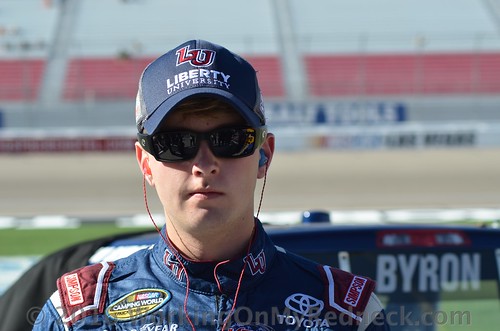 For the casual NASCAR fan the name William Byron may not  strike a chord or breed familiarity.  But, sports fans, this is a name that you should pay attention to this year!  Byron does not come from a racing background.  He has no famous racing relatives to help “grease the skids”, open the doors, help land big sponsorship deals, or guide him into some great helping hands.

Here is a little background information on how Byron has navigated his rather short racing career to now be under contract with one of NASCAR’s powerhouse in the sport, Hendrick Motorsports.

Byron is just 19 years old and became interested in racing when he was six years old, after seeing a stock car race on television and later attending a race at Martinsville Speedway in 2006. He began racing on the iRacing simulator as a teenager, with over 100 wins and 298 top fives in online competition. In 2012, he and his father explored how Byron could start racing offline – in real cars. He started racing Legends that year at the age of 15, relatively late for modern drivers. That year he won 33 races and became the Legend Car Young Lions Division champion.

Byron was signed to drive in the NASCAR K&N Pro Series East for 2015 by HScott Motorsports with Justin Marks, with sponsorship from Liberty University.  Byron also continued racing late models for JR Motorsports.  In his debut K&N East in February at New Smyrna Speedway, Byron finished 7th.  Byron won the second race of the season at Greenville-Pickens Speedway after starting second and leading all 152 laps (two laps past the scheduled distance).  Byron made his ARCA Racing Series debut at Lucas Oil Raceway in July, driving the No. 55 Liberty University Toyota Camry for Venturini Motorsports. Byron finished second after leading 120 laps. He scored four K&N East wins en route to winning the series championship.

On October 29, 2015, Kyle Busch Motorsports announced that Byron would run a full-time schedule in the team’s No. 9 Toyota Tundra in the Camping World Truck Series during the 2016 season.  To prepare him for the run, KBM fielded the No. 9 for him in the 2015 Lucas Oil 150 at Phoenix International Raceway.  Byron started the 2016 season on a low note crashing on the final lap at Daytona to finish 13th, and finishing 32nd at Atlanta after blowing an engine. Later, Byron would get his first top 3, 5, and 10 in the Truck Series after finishing a strong 3rd at Martinsville. Byron won his first Truck Series race at Kansas in May, after avoiding Ben Rhodes and Johnny Sauter’s crash on the last lap of the race, and took his second race win in Texas in June. He won the next race at Iowa, finished 17th at Gateway due to a crash, and won yet again at Kentucky, propelling him to first in points. He followed that up with his fifth win of the season at Pocono Raceway, breaking the Camping World Truck Series record for most wins by a rookie. The previous mark was held by Kurt Busch during the 2000 season with four wins.  He won the first race of the Round of 8 at New Hampshire, but suffered an engine failure at the last race of the Round of 6 at Phoenix, which cost him the chance to join the Championship 4. With a win at the final race at Homestead, he placed fifth in the overall standings, with a total seven wins and eleven top 5s, and 16 top 10s in 23 races. William also won the Sunoco Rookie of the Year Award. Despite not being in contention for the driver’s championship, William’s team Kyle Busch Motorsports still collected the owner’s title for team No. 9.

Because of Byron’s meteoric success in the CWTS in 2016,  Rick Hendrick pulled a sneaky surprise on all of the other super teams in NASCAR.  Out of the clear blue sky on August 18, 2016, Byron and Hendrick Motorsports announced they have signed a multi-year driver agreement, with Byron running full-time in the Xfinity Series driving the No. 9 Chevrolet Camaro for JR Motorsports in 2017.

It appears that Byron has grown, matured, and had success at every level of racing so far in his extremely short racing career. This year will pose its own particular challenges for Byron, stepping up from the Camping World Truck Series to the Xfinity Series will test his capabilities.  The NXS includes a high level of competition, longer races, a few more road courses and a longer race schedule.

However, there is no indication that Byron will be over his head.  To the contrary, there is every indication that Byron will be one of the drivers that will be in the hunt for the championship when the cars roll into Homestead in November!  Having made that statement, it would also appear that Hendrick is grooming the young Byron to step into the HMS No. 5 Chevy.  the present driver, Kasey Kahne, is under contract with HMS through the end of 2018.  That could give Byron two seasons in the NXS to gather more experience, hone his racing skills, and be ready to assume that ride in “the big show”!

WOMR strongly suggests that you keep your eyes on this incredibly talented 19 year young man.  This year Hendrick has put Byron into a JR Motorsports Xfinity ride where he may be one of the drivers that could be standing in Victory Lane at Homestead hoisting the championship trophy over his head!