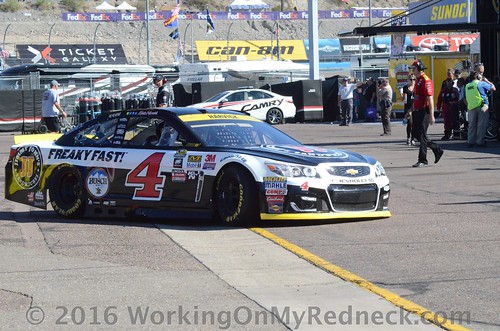 Jimmy John’s, the “freaky fast” gourmet sandwich chain since 1983, has extended its partnership with Stewart-Haas Racing in a multiyear agreement to continue as a primary sponsor of driver Kevin Harvick and the No. 4 team in the NASCAR Premier Series.

“We are fortunate to partner with Kevin for many years in a very meaningful way,” said Jimmy John Liautaud, owner and founder of Jimmy John’s. “On and off the track, Kevin and (wife) DeLana Harvick are winners in all they do, and Stewart-Haas Racing has proven to be an excellent home for them and for Jimmy John’s.”

From humble beginnings in Charleston, Illinois, in 1983, Jimmy John’s has grown to become a dominant entity in the quick-service restaurant industry. With more than 2,600 stores throughout the United States, Jimmy John’s success is attributed to an innate desire to simply be the best. Its award-winning bread is baked fresh each day, and its meat and vegetables are sliced fresh daily. Its food contains no additives and no vegetable-based fillers. Augmenting the company’s unmatched product is equally unmatched service, with every sandwich made fresh-to-order.

“I’ve known Jimmy since 2009 and I’ve personally seen how driven he is and how his work ethic is embraced by Jimmy John’s franchise owners,” said Harvick, the 2014 Premier Series champion. “He wants to be the best, period. And he’ll out-work everyone to be the best. That’s the same mindset we have in racing. I’m proud to continue this partnership with Jimmy John’s at Stewart-Haas Racing.”

“Jimmy’s passion for quality products and service has made Jimmy John’s what it is today,” said Stewart, the three-time Premier Series champion who co-owns SHR with industrialist Gene Haas. “He’s a savvy marketer who has seen the benefit of a NASCAR team sponsorship. We’re pleased to continue our partnership with Jimmy John’s because combining quality with quickness is what Stewart-Haas Racing is all about.”

Jimmy John’s makes freaky fast sandwiches using real, fresh ingredients. Homemade bread is served freshly baked, quality meats are freshly sliced, and locally purchased veggies are freshly sliced every day. Founded in 1983 by Jimmy John Liautaud in Charleston, Illinois, Jimmy John’s is one of the fastest growing franchises in the U.S. with more than 2,600 stores in 43 states. For more information, visit jimmyjohns.com or check us out on Facebook, Twitter, and Instagram at facebook.com/jimmyjohns, twitter.com/jimmyjohns, and instagram.com/jimmyjohns/.

Stewart-Haas Racing is the title-winning NASCAR Premier Series team co-owned by three-time series champion Tony Stewart and Gene Haas, founder of Haas Automation – the largest CNC machine tool builder in North America. The team fields four entries in the Premier Series – the No. 4 car for Kevin Harvick, the No. 10 car for Danica Patrick, the No. 14 car for Clint Bowyer and the No. 41 car for Kurt Busch. Based in Kannapolis, North Carolina, Stewart-Haas Racing operates out of a 200,000-square-foot facility with approximately 300 employees. For more information, please visit us on the Web at www.StewartHaasRacing.com, on Facebook at www.Facebook.com/StewartHaasRacing, on Twitter @StewartHaasRcng and on Instagram @StewartHaasRacing.

Kraus Teams Up With Mike Hillman At Richmond