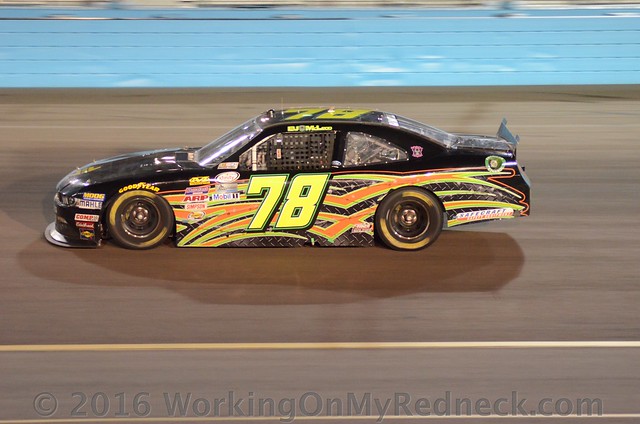 It’s hard to digest that less than 10 months ago, B.J. McLeod Motorsports thought of campaigning a full-time NASCAR XFINITY Series (NXS) schedule was just a thought on paper.

Fast forward to this Saturday, not only did the thought become a reality, but B.J. McLeod Motorsports will take the checkered flag in its first full season of NASCAR XFINITY Series competition.

However, Saturday’s Ford EcoBoost 300 isn’t just about the final checkered flag in 2016, it’s about remembering the priceless memories the team shared in its inaugural season, while hoping to make new ones in South Florida.

“I can’t believe it’s the end of the year,” said BJ McLeod. “Throughout the year, we’ve been able to build B.J. McLeod Motorsports from the ground up and successfully put two race cars on the track every week. We’ve been fortunate a couple times to even make it three.

“Heading to Homestead this week, it’s about fighting our own battles and making sure our No. 78 B.J. McLeod Motorsports Ford is the strongest it can be. I had the opportunity to get some laps around Homestead last year and I’m hoping that experience will come into play this weekend.”

Not only is McLeod’s main goal to put his No. 78 Main Gate Ford Mustang inside the top-20 for this weekend’s season finale, but the Wauchula, Florida native also wants to keep his footing inside the top-20 in the championship standings, one of the team’s goals set early in the season.

“When you flash back through our year, we certainly had more ups than downs,” said McLeod. “We also improved overall as an organization and that makes the season successful. We’d still like to see if we can sneak a top-15 finish on Saturday afternoon, but at the end of the day, we know we’d settle for a top-20 result and finish inside the top-20 in points.”

Following Homestead, McLeod says his team will embrace some much-needed rest, but it won’t be long before the traffic at their Mooresville, North Carolina-based shop is busy getting ready for the 2017 NASCAR XFINITY Series season.

“The plan is to be back in the XFINITY Series next year,” added McLeod. “We’ll continue to work on putting competitive equipment on the track, while giving drivers opportunities to get some experience and build their resume in our cars. We have some things planned during the off-season to boost our overall presence next year and we look forward to announcing those plans when the timing is right.

“Before we can get focused on 2017, we need to get through Homestead. That’s the next race on the docket and even though it’s the last race of the year, it’s just as important as the first. Hopefully, all three of our cars will see the checkered flag this weekend with performances that give us welcomed momentum during the break.”

McLeod, who will make his 76th career NASCAR national series start this weekend welcomes back veteran Travis Kvapil who is set to make his eighth start of the season and first since Chicagoland Speedway in September. Kvapil, the 2003 NASCAR Camping World Truck Series champion earned a season-best 20th place result at Bristol Motor Speedway in August aboard the No. 15 Ford Mustang.

Kvapil will pull double-duty this weekend at Homestead. In addition to his XFINITY Series responsibilities, the Janesville, Wisc. will also run in Friday night’s Ford EcoBoost 200 for MAKE Motorsports.

In addition to McLeod, B.J. McLeod Motorsports’ third car at Homestead will be steered by former XFINITY Series champion Jeff Green aboard the No. 99 Ford Mustang.

“It’s great to have Travis and Jeff as teammates this weekend,” added McLeod. “Both have really done a tremendous job for B.J. McLeod Motorsports this season and I’m greatly appreciative for that. It’s because of their abilities and expertise that make our team better overall.

“At the end of the day, if we can finish with all three cars somewhere inside the top-25, that would be a great feat for us and something to build on for Homestead 2017.”

Veteran industry crew chief George (David) Ingram Jr. will call the shots for the No. 78 Main Gate Ford Mustang for the 33rd race of the 2016 NASCAR XFINITY Series season.

Marketing partnership opportunities are available for the No. 78 Ford Mustang for the 2017 NASCAR XFINITY Series seasons. Interested inquiries are encouraged to contactpr@bjmcleodmotorsports.com.