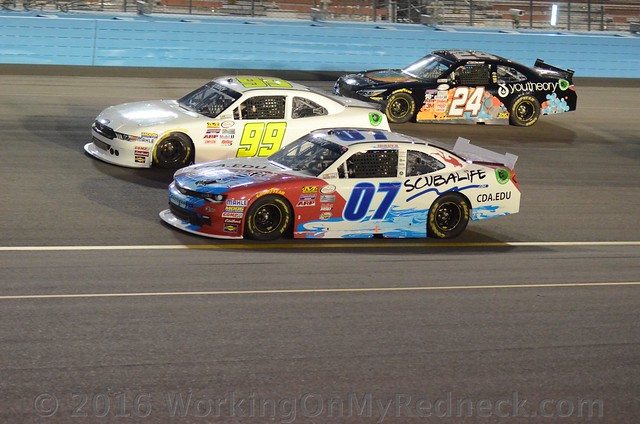 NASCAR XFINITY Series (NXS) driver Ray Black Jr. is ready to wrap up his rookie year in the racing league in front of friends and family this weekend at Homestead-Miami Speedway.

The 25-year-old driver of the No. 07 ScubaLife.com Chevrolet is based out of Flagler Beach, Fla. and is excited to have the chance to show some of his biggest supporters what a weekend at the track is like for him.

“It’s really exciting to have the final race of the season in Florida,” explained Black. “I live just a few hours north of Miami, so I’ll have a lot of friends and family coming down for this one. Obviously the pressure is on to run well since it is the last race of the season, but it also gives me a chance to celebrate the year and have fun with my team and family.”

As Black’s rookie season in the NXS comes to a close this weekend, he noted how while he and his SS Green Light Racing team had their ups and downs, overall they had fun and made a lot of progress. With just one race remaining on the season, they have collected two Top-15, nine Top-20 and 19 Top-25 finishes.

“I really did have a lot of fun this season with my team in the XFINITY Series,” said Black. “It was a lot of hard work, but I feel that we made a lot of progress throughout the year and learned a lot. It has gone by fast, but I enjoyed every minute of it.”

For Black, some of the season’s high points came at two completely different styles of tracks.

“Short tracks were a strong point for us this year,” Black stated. “Bristol and Dover were the site of two of our best races. The road courses were also a lot of fun once I got the hang of them. Those are like big short tracks and a blast to race on.”

Overall, Black believes one of the biggest lessons he learned from the 2016 season dealt with attitude and how big of a factor it can play in racing.

“Each weekend really is affected by how you approach it,” Black explained. “Attitude can play a huge role in racing and making sure to have positivity at the start of each week can really go a long way.”

Fans can catch Black competing in the Ford Ecoboost 300 at Homstead-Miami Speedway on Saturday, November 19 at 3:30 p.m. EST. Live race coverage can be found on NBCSN and via MRN Radio.