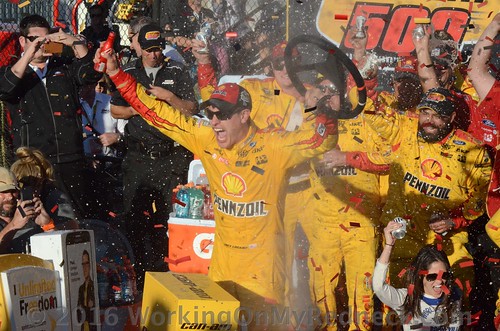 Joey Logano earned a return trip to the Championship 4 at Homestead-Miami Speedway after a year’s absence.

Kyle Busch will head to the South Florida track to try to defend his 2015 NASCAR Sprint Cup Series title.

And Kevin Harvick won’t be competing for the title for the first time since NASCAR debuted its elimination Chase format in 2014. Needing a victory to advance, as it turned out, Harvick finished fourth in Sunday’s Can-Am 500 at Phoenix International Raceway.

In a race that featured spectacular side-by-side racing and a substitute driver who dominated the first 250 laps of the event after starting from the pole, Logano beat Busch to the finish line by .587 seconds in the second of two overtimes.

Logano’s first victory at the one-mile track couldn’t have been timelier. The win – his third of the season and the 17th of his career – gave Logano an automatic berth in the Championship 4 race, set for next Sunday.

“This feels so good,” said Logano, who took the lead from the fourth position when a wreck involving race leader Matt Kenseth, Busch and polestitter Alex Bowman ended the first attempt at overtime. “I’ve never felt this good about a win before. There was so much on the line and everyone brings their A-game when it comes to winning championships, and this team did it.

“Man, this feels so good. I had a good restart there at the end (in the second overtime) and holding off Kyle to try to get this thing into Miami. We’re racing for a championship now. We did exactly what we had to do. We’ve got to go to Homestead and do the same thing…

“I’m speechless right now. I feel like I just won the Daytona 500 again.”

Busch earned the last available spot in the season finale with his runner-up finish, but it came at the expense of Kenseth, his Joe Gibbs Racing teammate. Kenseth led the field to the first overtime restart on Lap 317, with Bowman beside him.

From the third spot, Busch had a strong run and dived to the inside of Bowman, who went low to block. Busch shoved Bowman forward, and when Kenseth turned down from the outside lane in Turn 1, thinking he was clear, contact from Bowman’s Chevrolet sent Kenseth’s Toyota spinning in an accident that knocked the 2003 series champion out of the Championship 4.

For Busch, the incident made advancing to the finale bittersweet.

“Well, right now it feels pretty (lousy), but tomorrow it might feel a lot better,” Busch said. “I’m not sure, depends on what Matt’s interpretation is, and whether or not he can forgive. You know, I just feel really bad about what happened there on that last restart. It just wasn’t what I anticipated having happen, and I just feel bad. The 20 (Kenseth) should have been the Gibbs car to go through, and I was just trying to make a position there on the 88, felt like I was to his inside and had the position…

“It translated into the 20 crashing. That’s not how at all I foresaw that going. I was hoping I could get the 88 underneath him and force him up and have him kind of block the 22 and check up the outside row and then I could have a position between me and the 22 and get myself and the 20 in. Math just didn’t quite work out that way today.”

In a race that went 12 laps beyond its scheduled distance of 312 laps, Kyle Larson ran third, followed by Harvick, Kurt Busch, Bowman and Denny Hamlin. Like Kenseth, who finished 21st after the late wreck, Harvick, Hamlin and Kurt Busch all were eliminated from the Chase.

Driving in place of Dale Earnhardt Jr., Bowman led the first 92 laps and 194 overall in posting the best finish of his career. But his strong performance tinged with regret.

“It’s unfortunate. But I don’t think you can really place the blame on one person. It just sucks for Matt. I don’t know Matt. He’s probably really mad at me right now, I’d imagine, but hopefully we can move past it and race clean at Homestead.”

Four drivers, one race, one championship, who will be the last man standing? 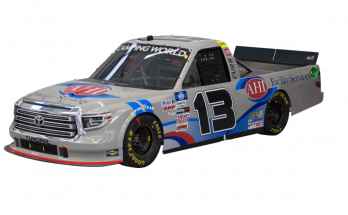 Sauter Rolls Off 12th At Pocono