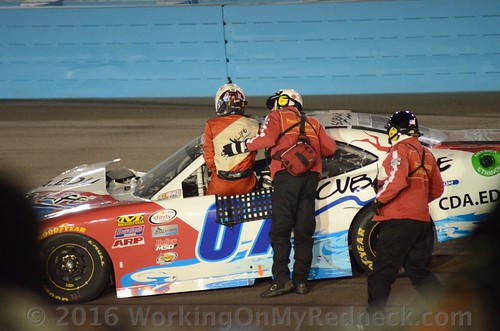 NASCAR XFINITY Series (NXS) driver Ray Black Jr.’s return to Phoenix International Raceway was cut short Saturday night, as a melted bead in his right front tire caused the No. 07 ScubaLife.com Chevrolet Camaro to slide up into the outside wall and cause race-ending damage.

Black and his SS Green Light Racing team worked hard all weekend long with a tough-handling racecar. Throughout both of the weekend’s practice sessions, they fought hard on loosening up an extremely tight Chevrolet.

After qualifying 27th for Saturday’s Ticket Galaxy 200, Black and the team continued to try to loosen up the car throughout the main event. As the leaders set a blistering pace on the field, Black knew his team would have to gamble with strategy to gain track position throughout the night.

With a caution coming out on Lap 93, Black and his team decided to roll the dice and take a wave around instead of coming in to pit in order to get back on a more competitive lap. The team was certain that they would be able to pit at a later caution to loosen up the car a little more to Black’s liking.

Unfortunately, just over 10 laps later a bead on Black’s right front tire would melt and cause him to slide up into the outside wall. The damage would prove to be too much for the team to repair and end Black’s night early. He would go on to be scored in 36th place.

“It was disappointing with how our race ended at Phoenix this weekend,” explained Black. “We had worked so hard all weekend, taking some big swings at the car to get it to handle how we wanted it to, and I think we were making some good progress right before the bead melted. We were taking a gamble with our pit strategy, and I really think it could have helped us grab a solid finish if the tire hadn’t gone down. Unfortunately, we had some bad luck but we’ll just start looking ahead to Homestead!”

Next up for Black and his team is the season finale race at Homestead-Miami Speedway on Saturday, November 19 at 3:30 p.m. EST.

Fans can keep up with Ray Black Jr. on and off the track by following him and his sponsor, ScubaLife, on Facebook, Twitter and Instagram at @TeamScubaRacing and @RayBlackJr. Learn more about Ray Black Jr. and Team Scuba by visiting www.rayblackjr.com and www.teamscuba.com.

About Ray Black Jr.
Ray Black, Jr. grew up in Florida after relocating from Montgomery, Alabama at age 9. It was here that Black fell in love with deep sea diving after a couple of scuba trips with his father. His passion for motorsports came later at age 14 after playing some racing video games. He began competing in the Florida Mini Cup Racing Association (FMCRA), where finished in the Top-5 in every race and secured the FMCRA Junior All Star Championship. In 2013 Black moved up to racing pro late models and then into the NASCAR Camping World Truck Series in 2014. During that year, he got his first taste of true NASCAR racing when he competed in seven races for SS Green Light Racing. In 2015, Black competed in his first full season of NASCAR in the Camping World Truck Series, where he finished 11th in the championship standings with one Top-5 and 11 Top-15 finishes. Black will compete in the NASCAR XFINITY Series for the 2016 season.