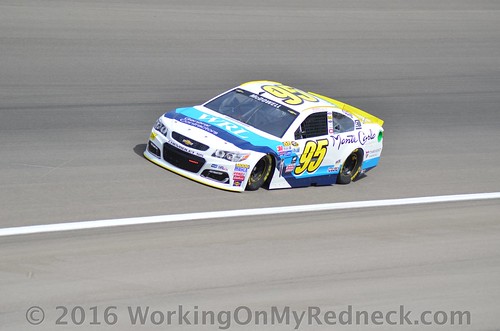 NASCAR driver Michael McDowell secured his 15th career-best finish of the 2016 NASCAR Sprint Cup Series (NSCS) season at Texas Motor Speedway during the AAA Texas 500, finishing 23rd in both a rain-delayed and rain-shortened race on Sundayevening.

The weekend started out strong for Circle Sport – Leavine Family Racing (CSLFR), as McDowell consistently ran Top-20 laps times in all three practice sessions, even finishing 6th fastest on the leaderboard in the second practice session on Saturday morning.

Although the team qualified 28th quickest, the team was confident they would have the No. 95 Chevy dialed in before the start of the race on Sunday.

The AAA Texas 500, delayed nearly six hours, began with the first five laps under a green / yellow flag run. Once the green flag fell, McDowell quickly moved up multiple spots into the Top-25 from his 28th place starting position.

Though McDowell had a fast No. 95 Thrivent Financial Chevrolet SS, the team did have some troubles finding the right setup during the 293-lap race.

Fortunately, Crew Chief Todd Parrott made a handful of strategic calls to pit under green flag runs in order to make needed adjustments for McDowell to finish the race strong.

During the second half of the race, Parrott reported that the antenna on McDowell’s radio was broken and that he could barely hear his driver speaking to him. The pair stayed calm and continued doing their jobs as a driver and crew chief duo to finish out strong. Luckily, McDowell could still hear spotter, Steve Barkdoll on the radio and was able to finish out the race with no major issues.

After completing 293 of 334 laps of the AAA Texas 500, rain began to fall, causing the mile and a half track to be lost and shortening the 500-mile race. McDowell made it as far as 23rd before the race was officially called just three hours after it began.

“Our night didn’t end exactly the way we wanted it to,” said McDowell. “But I am extremely proud of our team for working so hard despite a few hiccups during the race. We made some great changes during pit stops and had a fast No. 95 Chevy. I’m looking forward to moving on and heading to my home track in Phoenix next weekend!”

Next up for CSLFR is McDowell’s home track, Phoenix International Raceway, for the Can-Am 500, which will take place on Sunday, November 13 at 2 p.m. ET.

Formed in 2016, Joe Falk, owner of Circle Sport Racing and Bob and Sharon Leavine, owners of Leavine Family Racing teamed up to compete in the 2016 NASCAR Sprint Cup Series season as Circle Sport-Leavine Family Racing.  The team will field the No. 95 Chevrolet SS, which will be driven by Michael McDowell as well as Ty Dillon in select races.  The team operates out of their Concord, N.C.-based race shop with a veteran group of racing personnel and is driven by several core principals including Value, Integrity, Flexibility, Opportunity, Access and Experience.  For more information, please visit www.CSLFR95.com.