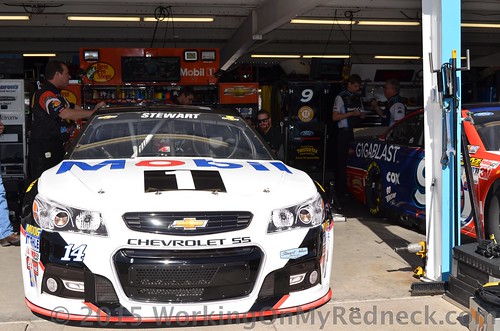 Tony Stewart, driver of the No. 14 Bass Pro Shop/Mobil 1 Chevrolet for Stewart-Haas Racing (SHR), finished 31st Sunday in his 28th and final NASCAR Sprint Cup race at Texas Motor Speedway in Fort Worth.

It was a long AAA Texas 500 for the three-time champion, who joined 39 other drivers plus crews and race fans waiting out the six-hour rain delay that turned the afternoon event into a night race. Stewart, like most of the drivers, struggled with the handling of his racecar on the Texas high banks made even slipperier by the weather.

“That was a long day and night,” Stewart said after the race.

The No. 14 team struggled Friday, posting the 17th-quickest time of first-round qualifying, but handling issues kept Stewart from completing a lap at speed in the second round. Saturday saw the team continue working on the handling issues in both practices. Then on Sunday, just as Stewart climbed into the No. 14 for the scheduled 1 p.m. CST start, the heavens opened, sending drivers and crews scurrying for shelter.

NASCAR started the race at 7 p.m. local time, and the cars ran more than 20 laps in single file to help dry the track before NASCAR threw the green flag.

Stewart started 23rd and held his position in the early going but quickly reported he needed adjustments to get through the center and exit of turns one and two. The lap-30 competition caution saw good pit work by his SHR crew to move the No. 14 to 22nd. When the race restarted, Stewart reported the handling issues were still hindering lap times and said it felt like both ends of the car were fighting each other.

Stewart lost a lap to the leaders on lap 65 and went two laps down by lap 108. The No. 14 crew spent the rest of the race working on a variety of changes to cure the handling issues. While the changes improved Stewart’s lap times, he couldn’t keep up with the leaders or overcome the early deficit and finished 31st.

Stewart has only next week’s race at Phoenix International Raceway and the season finale at Homestead-Miami (Fla.) Speedway left in his stellar 18-year Sprint Cup career.

Kevin Harvick, driver of the No. 4 Busch Beer Chevrolet SS, led the four-car SHR contingent Sundayby finishing sixth. It was his 25th top-10 this season and his 16th top-10 in 28 career Sprint Cup starts at Texas.

Carl Edwards won the AAA Texas 500 to score his 28th career Sprint Cup victory, his third of the season and his fourth at Texas.
Joey Logano finished second to Edwards when the race was called official after 293 of the scheduled 334 laps when rain inundated the racetrack. Martin Truex Jr., Chase Elliott and Kyle Busch rounded out the top-five. Harvick, Matt Kenseth, Kasey Kahne, Denny Hamlin and Ryan Newman comprised the remainder of the top-10.