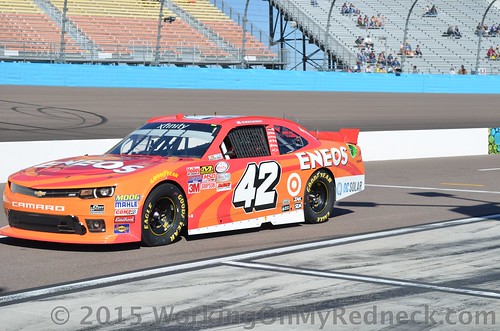 Grabbing the lead after a restart on Lap 171 of 200, Kyle Larson moved to the top of the track just in time to hold off polesitter Brad Keselowski for the victory in Saturday’s O’Reilly Auto Parts Challenge at Texas Motor Speedway.

In a race that saw Joe Gibbs Racing drivers Erik Jones and Daniel Suarez open some breathing room in the inaugural NASCAR XFINITY Series Chase with respective fourth- and fifth-place finishes, Larson got a push from sixth-place finisher Elliott Sadler on the decisive restart and kept Keselowski behind him for the final 30 laps.

Despite brushing the outside wall in Turn 1 with eight laps left, Larson’s No. 42 Chip Ganassi Racing Chevrolet got to the finish line .385 seconds ahead of Keselowski’s No. 22 Team Penske Ford, as the winner worked traffic over the closing five laps.

“I love seeing Elliott Sadler behind me on the restarts,” said Larson, who won for the first time at Texas, the second time this season and the fifth time in his career. “He’s really good at taking off and pushing. He helped me win Pocono earlier this year, and he helped me win this one.

“I was just really tight on the short runs in traffic there, but once I got to clean air, I was like, ‘Oh, man, I’m loose,’ and I got nervous and got to the top just in time to get rolling. I actually got loose over the bumps and hit the wall in (Turn) 1. But I had a big enough gap when I hit the wall that he wasn’t able to get to me.”

In fact, the brush with the wall helped to tighten the handling condition of Larson’s car and made it easier to drive.

Seeking his first XFINITY Series victory of the season, Keselowski led 145 laps and was delighted with the speed in his car. But that emotion was tempered by the disappointment of losing a race with perhaps the fastest car.

“Whatever car got out in front, with the way the aerodynamics are, was going to control the pace,” Keselowski said. “It’s so hard to pass because the aero is so important and the cars are so equal that way.

“I thought maybe we were just a touch faster, but without the track position, you lose too much grip behind the guy to do anything.”

Suarez took over the Chase lead by one point over Sadler and 17 clear of fifth-place Justin Allgaier, with a cut to the top four drivers looming next Saturday at Phoenix. Jones gained two positions to third place, seven points ahead of Allgaier.

“It was one of the first good points days we’ve had in this Chase,” Jones said. “It was a good, solid day—what we needed to do. We want to go, obviously, and try to win these races, but we just didn’t have the car to do it today.”

Ryan Reed, Darrell Wallace Jr., and Brendan Gaughan are sixth, seventh and eighth, respectively, in the Chase standings. Reed trails Koch by five points entering the Phoenix race, with Wallace behind by 20 and Gaughan 23 back of the current cut line.

Check out the unofficial results of the O’Reilly Auto Parts Challenge.