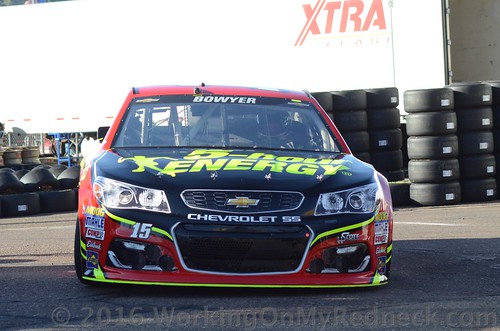 NASCAR Sprint Cup Series team owner Harry Scott says no decisions have been made concerning the future of the HScott Motorsports organization and likely won’t be until after the completion of the 2016 season.

HScott currently fields two full-time teams in Sprint Cup, the No. 46 of driver Michael Annett and the No. 15 of driver Clint Bowyer. The organization, which runs under the Chevrolet banner, utilizes engines from Hendrick Motorsports.

It was announced Friday that Annett would move to JR Motorsports next season to compete full-time in the NASCAR XFINITY Series. Pilot Flying J, his current sponsor in Sprint Cup, will make the move to JRM as well.

Bowyer’s stay with HScott has been for the ’16 season only as he moves on to Stewart-Haas Racing next year to take over that organization’s No. 14 for three-time series champion Tony Stewart. Sponsor 5-hour Energy will move to Furniture Row Racing where it will be aligned with driver Erik Jones.

All of which has led to speculation concerning the future of HScott.

“First, I want to wish Michael and Pilot Flying J success in the future,” Scott said in a statement provided to NASCAR.com. “I have enjoyed working with them and wish them all the best.

“As for the 2017 season, I am considering a number of options — including an offer to run a different driver — but no final decisions have been made and won’t be announced until after the end of the season.”

Scott has a charter, which guarantees a spot in the starting field each week, for both the No. 15 and 46 entries. However, the charter for the No. 46 entry was a one-year arrangement between HScott and Premium Motorsports owner Jay Robinson.

Bowyer is currently 27th in Sprint Cup points with no wins and only three top-10 finishes. Annett is 36th with no top 10s.

HScott has been fielding full-time entries in NASCAR’s premier series since 2014 after purchasing the assets of Phoenix Racing. Previously located in Spartanburg, South Carolina, the organization moved its headquarters to Mooresville, North Carolina, before the start of the ’16 season.

It doesn’t take and rocket scientist nor a mathmatical wizzard to figure out just what Harry Scott is laying out.  After Homestead the team has neither drivers nor any sponsors for 2017.  Let me remind you that both of those items are mandatory in order to have a functional race team, last I checked!

So unless there is a parting of the seas, you can scratch HScott Motorsports as a NASCAR Sprint Cup race team for 2017!