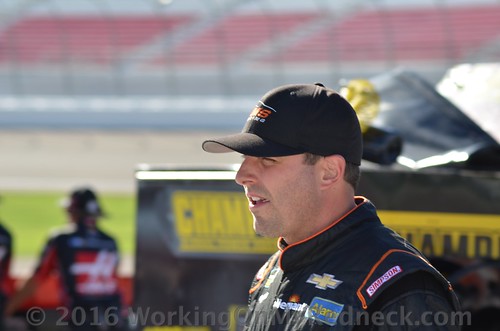 Sauter started Saturday’s event from the fifth position. On lap 37, the Necedah, Wis., native pitted for two tires and fuel and restarted from the sixth position. As the race returned to green he reported to crew chief Joe Shear, Jr., that something seemed to be wrong with the left front shock. A caution occurred allowing the team to pit and replace the shock. By lap 55, Sauter was back in the top 10 with his GMS Racing teammates. The field lined up for a green-white-checkered finish with Sauter in the sixth position. The Smokey Mountain Herbal Snuff Chevrolet crossed the line in the seventh position, earning Sauter a spot in the next round of The Chase.

JOHNNY SAUTER QUOTE:
“We’ve had a lot of races this year that haven’t gone our way for whatever reason and today looked like it was going to be one of those with the shock change early on. This No. 21 team didn’t give up today and we were able to get up there at the end and fight for our place in the next round of The Chase. It’s incredible to see how far GMS Racing has come in a year. I’m thankful they gave me the opportunity to be a part of this.”

NEXT RACE:
The NASCAR Camping World Truck Series returns to the track on October 29 at Martinsville Speedway.