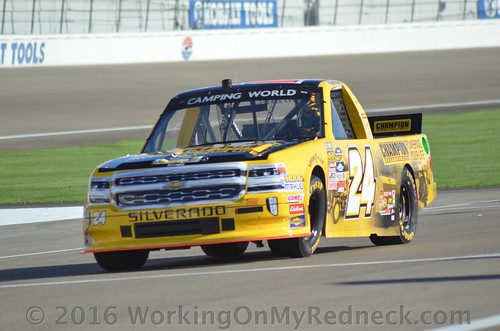 The Fairhope, Ala., native started the 94-lap event from the second position. The driver took the lead on the initial green flag and held onto that position until lap 15, when he brought the Plugfones Chevrolet to pit road under caution. After several trucks stayed out resulting in the No. 24 lining up 10th for the restart. Enfinger came to pit road two additional times to get fuel and the team performed one two-tire stop. When the fifth caution of the day occurred on lap 61, crew chief Jeff Stankiewicz called for Enfinger to bring the No. 24 Plugfones Chevrolet to pit road for a splash of Sunoco fuel. After an extended yellow-flag period he led the field to the green after the leaders came to pit road late. Battling with the No. 11 on the restart, Enfinger assumed the race lead for the fourth time of the day on lap 71. Teammate Spencer Gallagher took over the lead for one lap on 92 but Enfinger gained the lead back on lap 93 and stayed in the lead until crossing the start-finish line to claim his first career NCWTS win in his home state. The win marks GMS Racing’s fourth victory of the 2016 NASCAR Camping World Truck Series season.

GRANT ENFINGER QUOTE:
“Getting this win means the world to me. I have worked so hard to get to where I am today and I wouldn’t be here without all of my supporters and the guys that have worked countless hours by my side. Thank you to GMS Racing, Plugfones, Champion Power Equipment, Holmes Excavation II and Beasley Allen Law Firm for giving me this opportunity. Roll Tide!”

NEXT RACE:
The NASCAR Camping World Truck Series returns to the track on October 29 at Martinsville Speedway.