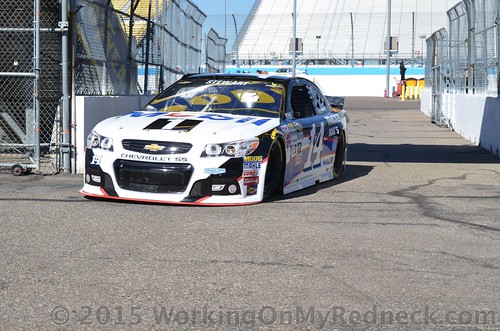 Tony Stewart, who is retiring from Sprint Cup racing at the end of the season after an 18-year career, employed a strategy of racing at the back of the lead pack most of the afternoon. In the past the future Hall of Famer would storm to the front in the closing laps, but on Sunday the No. 14 did not climb to the front before the checkered flag fell.

“Wasn’t the finish we wanted today, but we didn’t get wrecked either,” said Stewart, whose success at restrictor plate tracks is balanced by his disdain for the form of racing that gets its name from the NASCAR-mandated “restrictor plates” in the engines to cap speeds. A byproduct of “plate racing” is that the cars stay bunched in packs, often spawning multicar accidents.

Drivers complain they are at the mercy of their 39 competitors, since one mistake can ruin their day. Sunday’s race saw several cars encounter problems, but the field avoided the huge multicar accidents common at Talladega.

Stewart qualified 21st Saturday and played it safe in the early going Sunday, drifting to the back of the pack. In the first two-thirds of the race there were no big incidents, only minor cautions for blown engines and debris. Green-flag pit stops at laps 38 and 81 went without incident; however, Stewart lost the draft after the second stop. Stewart and AJ Allmendinger drafted together but were losing nearly a second a lap to the multicar lead pack.

Just as it looked bleak for staying on the lead lap with Stewart nearly 35 seconds behind the leaders, a three-car accident at the back of the lead pack came just in time to keep him on the lead lap. With a new lease on life, Stewart restarted the race in 24th with 68 laps remaining, but it was still too early to risk running in the pack and putting himself at the mercy of another driver’s mistake. After another caution for a blown motor with 42 laps to go, Stewart told his team over the radio “the big one” was brewing.

“I honestly want to stick to the plan,” Stewart said. “I know you guys don’t like that, but I know what’s going to happen here.”

His words proved prophetic. Several cautions in the closing laps bunched the field for a frenetic finish. Unfortunately, Stewart couldn’t take advantage and climb to the front. He took the checkered flag in 32nd.

Stewart walked out of Talladega for the final time as a Sprint Cup driver with one win, six second-place and nine top-five finishes, 14 top-10s and 329 laps led in 35 starts. Talladega and sister track Daytona (Fla.) International Speedway are NASCAR’s only two restrictor plate tracks. Combined, Stewart earned five wins, 18 top-fives and 28 top-10s and led 999 laps at those tracks in 70 points-paying races.

Kurt Busch, driver of the No. 41 Haas Automation/Monster Energy Chevrolet SS, led the four-car Stewart-Haas Racing (SHR) contingent Sunday by finishing fourth. It was his eighth top-five this season and his seventh top-five in 32 career Sprint Cup starts at Talladega.

Kevin Harvick, driver of the No. 4 Jimmy John’s Chevrolet SS for SHR, finished seventh. It was his 24th top-10 this season and his 14th top-10 in 32 career Sprint Cup starts at Talladega.

The next event on the Sprint Cup schedule – the sixth race of the Chase – is the Oct. 30 Goody’s Fast Relief 500 at Martinsville (Va.) Speedway. The race starts at 1 p.m. EDT with live coverage provided by NBCSN.